Academy of the dream to the bright bright future reality 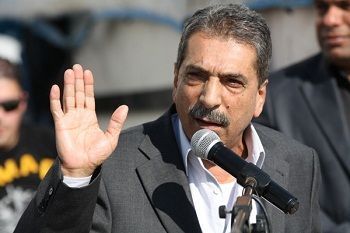 Member of the Central Committee of Fatah,
Chairman of the Board of Trustees of the Al-Istiqlal University

In the name of of Allah the Merciful
Academy of the dream to the bright bright future reality
Since the establishment of the Palestinian National Authority and the biggest obsession is to build state institutions from our deep belief that the state which is based on strong and effective institutions Leahy able to cope with everything that has to undergo difficulties.
Hence, the security of the institution was our top priority, as we are fully aware that security is a key hub for progress and prosperity, and thus it was necessary to create a security establishment take on the rehabilitation of cadres and staff working in the security services, and training in addition to absorbing the younger generations wishing to join the security establishment on the different branches.
Limited did not hold us back our potential, but we worked a long basing their struggles and to our dream of establishing our independent Palestinian state, that dream that we have made in order to achieve our blood and our souls that lived through another dream realized the establishment of the Palestinian Academy for Security Sciences.
From the very beginning it was to support the late Yasser Arafat _ Ndhalatna_ code significant impact in strengthening our resolve and led us forward, and in his footsteps continued the march. We highly appreciate the efforts of President Mahmoud Abbas, as well as the State of brother Prime Minister Salam Fayyad in academic support.
We look forward to the Arab and international partnership and cooperation programs contribute to the upgrading of academic and professional level of our associates, and we are counting a lot on our sources and self-supporting community, both in terms of institutions or individuals, private and civil society institutions.
We seek with all our contribution in the establishment of effective security institution, based on advanced professional basis, governed by law, and the motto of justice, and strike with an iron fist all tempted to tamper with the country's security and stability, and extend the same the other hand time to help our citizens, and we participate in the process Building.
We started, and for Palestine, we will continue, God willing.