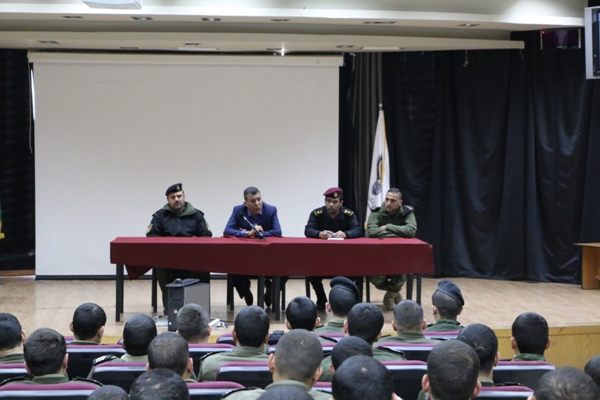 The Training and Development Institute at Al-Istiqlal University hosted Brig. Nasser Adawi the chairman of the international relations in The General Intelligence Agency who delivered a lecture entitled “The International Relations and Security Diplomacy” implemented as a non curricular activity in the institute.

In a tour at the university campus, Brig. Adawi was welcomed by the vice president for academic and military affairs, the chairman of the Department of the International Relations at the university and the director of the Training and Development Institute.

Adawi talked about the duties and missions of the department of international relations, indicating to the integrated cooperative relations between the diplomatic parties and the intelligence agency for building international relations serving the Palestinian national project. In addition to the risks practiced against the Palestinian security officers whether at the local or international level. Despite that, they were able to ground bases in all over the world which caused the countries competing in building relations with the State of Palestine.

At last, the chairman of the international relations of intelligence agency confirmed that the main role of the department is protecting the Palestinian communities, facilitating missions including students, merchants, and citizens of Palestine in Diaspora. That was clear in the war against Syria where the main role of the international relations is reducing the sufferings and helping the people of Yarmouk refugee camp, refugee camps in Lebanon, as well as the camps around the world.