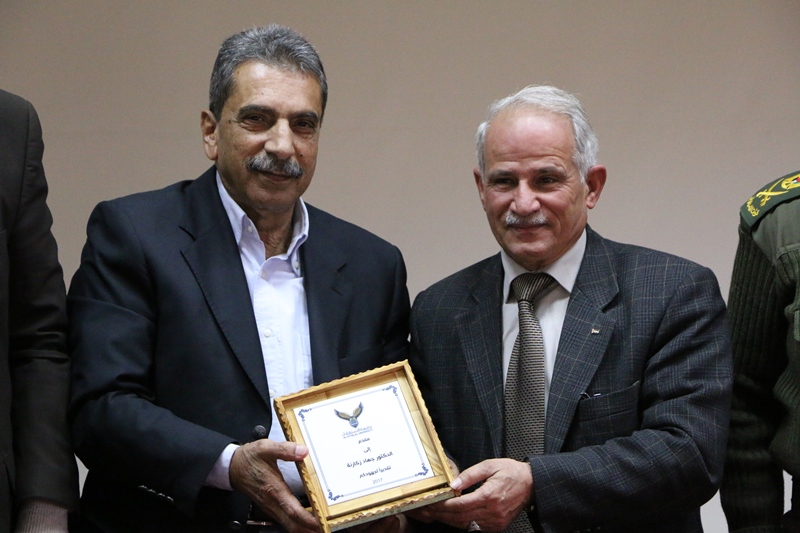 AlQadoumi initiated his speech in appreciating the efforts of Dr. Zakarneh in his experiences and administrative job which enforced the positive work and the progressed work during his job at the university for more than three years.

The Major General Tawfiq Tirawi talked about his relation with Zakarneh since his work as a chairman of public intelligence agency and starting the national project in cooperation with the ministry of education where Dr. Zakarneh worked as administrator.

The Major General Al-Tirawi mentioned Zakarneh’s national attitudes till he joined the university’s team. He confirmed that the later contributed in developing the university at the administrative side. Al-Tirawi addressed all the university employees to work and progress away from “social diseases” like backbiting ending his speech that the university will benefit from Zakarneh’s consults and future cooperation in the educational matters.

In the same context, the vice president for military affairs Major General Jum’a Hamdallah thanked Dr. Zakarneh and appreciated his excellent administrative performance indicating to the integration between the administrative and military departments in all fields during the work period of Zakarneh.

On his part and before Zakarneh narrated some important stations in his professional life especially the administrative part starting from the ministry of education in 2000 till his retirement, he thanked the administration of the university expressing his honor to work at the university. “I reached retirement in my full hope and love of work, the man’s achievement is measured by his affiliation and his love to work not in his age” he said.

Before closing his speech, Dr. Zakarneh presented 200 books in different subject to the library of the university to serve the cadets and staff.