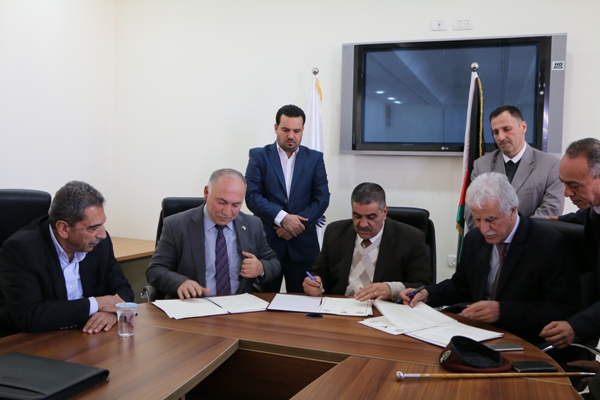 On Tuesday and at the university campus in Jericho, Al-Istiqlal university, Hebron University, and Palestine Technical University (Khadouri) held a special meeting for signing understanding memorandum about the master program “the Joint General Administration” in the presence of the chairman of the board of trustees the Major General Tawfiq Tirawi, the president of the university Prof. AbdelNaser Qadoumi, his vices president, consultants and the deans of the university’s faculties.

At the beginning of the meeting, the Major General Tirawi welcomed the attendees especially the presidents of Hebron and Palestine Technical Universities and the accompanying delegation assuring the exclusive security and military majors at Al-Istiqlal University with no competition with other universities in its majors. He pointed to the necessity of joint cooperation in academic programs to improve the governmental educational institutions which leads to develop the country and achieve its independence.

The Major General Al-Tirawi indicated to the readiness of Al-Istiqlal University for any educational activities in cooperation with the universities of Hebron and PTU as well as the rest of the Palestinian universities in sake of developing the educational process.

In the same context, Prof. AbdelNaser Qadoumi, the president of Al-Istiqlal University, confirmed the significance of this meeting which aims to integration in work and protecting the students of Palestine and their scientific achievements, indicating that the three universities are excellent in “General Administration ‘field. He pointed to the readiness of the academic staff at the University for implementing this program considering the three universities will be an example for the rest national universities in exchanging experiences.

Dr. Salah Alzerow, the president of the Hebron University thanked the chairman of the board of trustees and the administration of the Al-Istiqlal University. The development and expansion of the university’s campus took him by surprise considering this an advanced step towards the independence of the State.

As for the joint master program, he considered it the first step in the joint relationship between the three universities and building the scientific solidarity in light of joint scientific development.

While the president of Palestine Technical University, Dr. Marwan Awartani, thanked Al-Istiqlal University represented in the chairman of the board of trustees the Major General Tawfiq Tirawi, its president and administration for the sincere reception. He assured the importance of cooperation in the joint master program calling for more joint work with IU.

It is worth mentioning that the new master program “The Joint General Administration” is open for all students of administration major in the case of meeting its requirements.