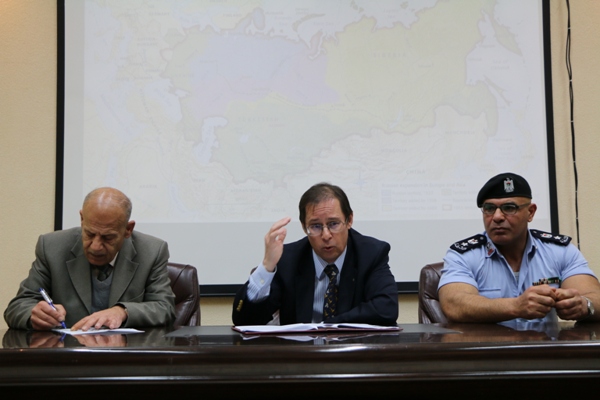 On Monday and at the Russian museum in Jericho, Al-Istiqlal University participated in the political seminar entitled “ The Foreign Russian Policy in the Middle East” organized by Russian representative Office in Palestine.

The seminar managed and initiated by Haidar Ghant, the representative of Russia in Palestine, who mentioned the historical ties between Palestine and Russia, as well as the Russian diplomatic works before the Israeli occupation on the Palestinian land where Russia opened its representative office in Jaffa in 1820 and the Russian consulate in the city of Jerusalem in 1847 that still work nowadays.

Ghant stressed his country’s permanent support for the Palestinian people till the end of the Israeli occupation over the Palestinian territory of 1967, as well as creating an independent, viable State of Palestine on continuous geography, with a Russian commitment towards implementing the whole resolutions by the UN and the International Security Council for the Palestinian cause.

At the seminar, which came as a memorial of the Russian diplomatic day corresponding the tenth of February every year, the Russian representative in Palestine mentioned that his home continues opening representative offices in the Arab countries as a result of its conviction in supporting and communicating the peoples for their interests and wills?

For his part, Dr. Ghasan Helew,the vice president for academic affairs at IU, thanked the representative of Russia in Palestine for his country’s interest in the Palestinian cause which is a proof of the historical ties and the political level between the two peoples.

Al-Helew sent a message to Russia by its representative including a request for working hard to capture its place as a superpower in the world, and the United States of the sole-dominant approach became a history, recalling the disasters done by Ottoman rule and its impact on the whole Arab area.

He also asked Russia to duplicate its efforts for pressing on the Israeli occupation to withdraw its last decisions concerning confiscation of the Palestinian land in favour of settlements expansion, in addition to stopping its aggressive practices as killing the Palestinians on the land every day.

As for the academic level at the university, the vice president for academic affairs talked about teaching Russian language and literature through courses and different majors as an evidence of the Palestinian concern in Russia.

At the end of the seminar, discussion and questions were opened for the visitors. Some questions were directed to the Russian representative in Palestine Haidar Ghant handled the Russian policy in the Middle East, its position towards the Syrian conflict, its efforts in ending the Palestinian division, and its continuous suggestions for permanent peace between the Palestinians and Israelis.

The seminar was attended by academics, officers, cadets of IU, and attendees from the Military College for the Palestinian Police.