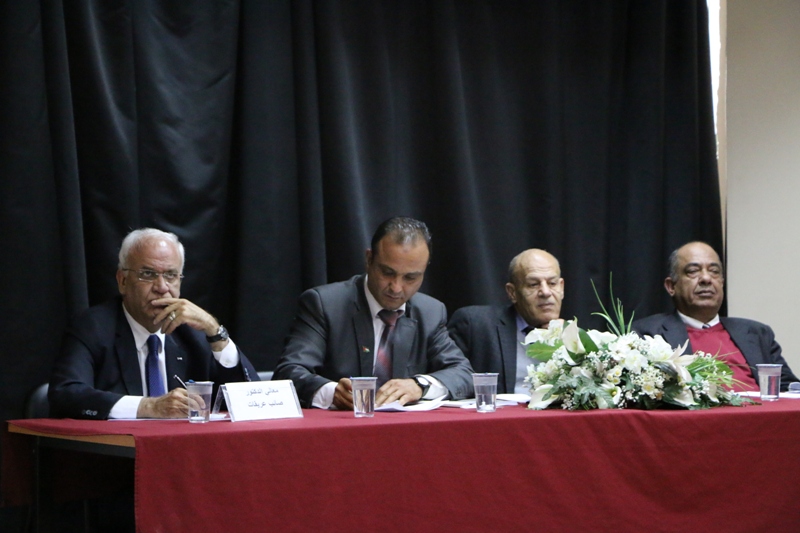 On Wednesday, at the Theatre of Sheikh Haza’ Bin Zayed at the university, Al-Istiqlal Center for the Strategic Studies at IU held a political seminar entitled “ The Outputs of Paris Conference 2017: Data of the Palestinian Reality”. Dr. Sa’eb Ereaqat the secretary of Liberation Organization talked from a political perspective and Dr. Mohammad Shalaldeh talked from the lawful perspective.

Dr. Sa’eb Ereaqat thanked Al-Istiqlal University for inviting him to participate in this seminar. He talked briefly about the outputs of Paris conference 2017 held on 15th of last November in Paris in a presence of 70 countries and four international organizations. That was a limiting basis for the Palestinian cause to not be postponed after the end of the crisis in the Arab region.

Ereaqat thanked his Excellency the president Mahmoud Abbas for his efforts in Paris conference, and for his attempt to tell the world about renounce terrorism. The French reply was by the president François Hollande who said at opening the conference that the key of solving and ending the conflict is just by the establishment of Palestinian state with Jerusalem as a capital.

He talked about the strategy of the Israeli prime minister Benjamin Netanyahu in wasting efforts of two-states solution, the rumor about the geographic point to separate the West Bank from Gaza Strip which completes what was planned by Ariel Sharon in 2005 to get rid of Gaza and evading responsibilities and blame Egypt instead, stressing that no Palestinian state will be in Gaza or without Gaza.

In the context of talking about the outputs of recent Paris conference, Ereaqat talked about three Palestinian demands from the European Union summed in: first, the outputs of Paris conference compatible with the international will but need follow up policy by most supporting countries for the Palestinian cause. The president Mahmoud Abbas proposed three Arab countries; Egypt, Saudi Arabia, and Jordan. Secondly, increasing the European recognition in the State of Palestine. Our Palestinian leadership is making intensive efforts with seven Arab countries to recognize our independent country. Thirdly, full and comprehensive boycott  for the Israeli settlements in all fields. He described it as a crime of war. Ereaqat mentioned that the Palestinian policy succeeded to cancel four appointments between Israel and the Europeans.

As for the new US administration presided by Donald Trump, Ereaqat described trump as a phenomenon no one predicts what he will do, and an ambiguous policy. While the American-Palestinian talks will never suspend and no one authorized to talk on behalf the Palestinian people except the PLO.

On his part, the legal expert Dr. Mohammad Shalaldeh commented on the last resolution of the Security Council (2334) issued at the end of the year 2016. This resolution has several legal considerations which could determine the biding force of the resolution in confronting conflict parties and to what extent Israeli is ready to implement it.