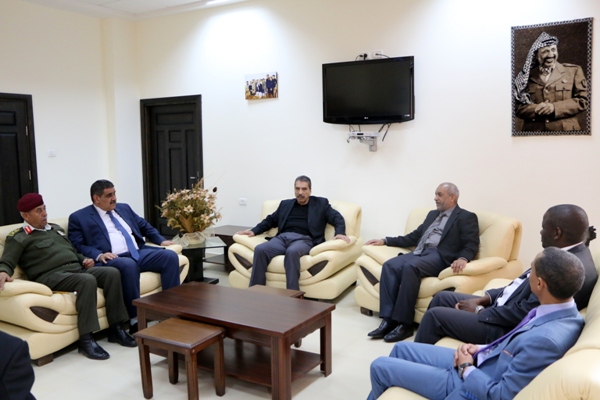 Jericho-Al-Istiqlal University on Tuesday, the chairman of the board of trustees Maj. Gen. Tawfiq Tirawi welcomed the ambassador of South Africa to Palestine Ashraf Sulaiman, his consultants, and his personal assistant in presence of the president of the University Prof. Abdel Nasser Qadoumi and his vices for the military and academic affairs.

Maj. Gen. Al-Tirawi praised the historical relationships between Palestine and South Africa indicating that it is not new but an old before the liberation of South Africa, especially the relationship of Fateh movement with other liberation movements is distinctive.

He expressed the pleasure of the Palestinian leadership for the development of South Africa and playing a leading and excellent role in the world. He wished the freedom and independence of the Palestinian people. He added that IU is one of the constructive institutions in building an independent Palestinian State; he also hoped cooperation with similar institutions in South Africa in the educational and academic fields as well as exchanging experiences.

For his part, the ambassador of South Africa to Palestine thanked Maj. Gen. Al-Tirawi for warm reception and welcome, stressing the deep relationship with the Palestinian people especially the relationship of Fateh movement with the Party of South Africa, which liberated his country, will remain and continue.

During the meeting, the ambassador promised to hold future agreement with Al-Istiqlal University and exchange cultural and academic experiences in the field of security. “We are ambitious to strengthen the relationship in the agricultural, industrial, educational, security fields…etc.” he said.

For his part, the president of the university and his vices for academic and military affairs met the guest and his companions. He presented a detailed presentation about the university, the academic and development process of faculties and buildings. He pointed to the cadets’ educational process during their studying period till graduation and involvement in security institutions.

He talked about the features of IU especially as it encompasses security, military and police majors and what distinguishing it is 30% of cadets are females. He indicated that the university is a member in the Arab, Islamic and international unions of universities. This allows the cadets to continue their studies in any of the universities that share the membership of these unions.

For his part, the ambassador Suliaman thanked again the president of the university, his vices and the attendants. He said that education is the future, stressing the depth of the historical relationship with the Palestinian people. He recalled his country’s experience in liberation. He wished freedom for our people and building his independent state through the political freedom and struggle considering IU is an example of this struggle.

Finally, the ambassador requested the Palestinian experiences in all cultural, economic, and technological fields, asserting the necessity of holding agreements and cooperation very soon.