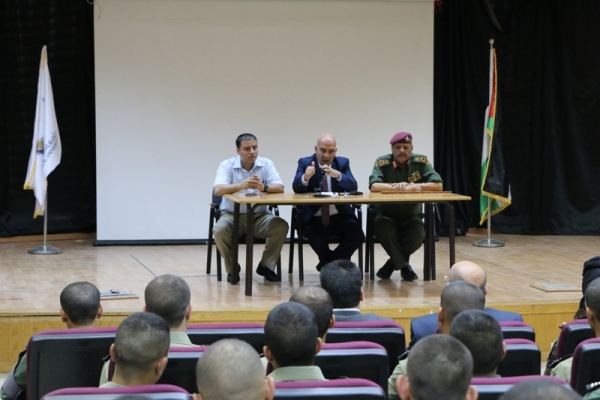 Maj. Gen. Adnan Damiri, Media Spokesperson for the Security Establishment, held a political lecture entitled "National Reconciliation" at the Sheikh Hazza Bin Zayed Al Nhayan Theater on the campus of Al-Istiqlal University on Sunday for the seniors under the supervision of the Institute of Training and Development.

He started his lecture about security and politics.”The security man does not make a policy but implementing it, that is built on two policies: the first is affiliation and the second is the loyalty” he said. He added that the Palestinian national unity is a strategic method to get rid of occupation and achieve liberty and victory.

Maj.Gen. Dhamiri spoke about the rights of citizenship for all the Palestinian people in the West Bank and Gaza Strip within one country and one right for equal rights and duties, without paying attention to all the statements which say that Fateh pays more than others.

In the course of the lecture, he thanked the Arab Republic of Egypt for its efforts in supporting the Palestinian reconciliation file. He spoke about the interests of all parties in order to restore security and safety in the region. The sole loser of completing reconciliation is State of Israel.

At the end of the lecture, the questions were opened to students and focused on the internal situation of Fateh movement, political direction, achieving security peace, and previous experiences of national reconciliation.

After the lecture, the outstanding students in field training in 2016-2017 were honored.