The Opening of the Closed Military Training of about 450 students 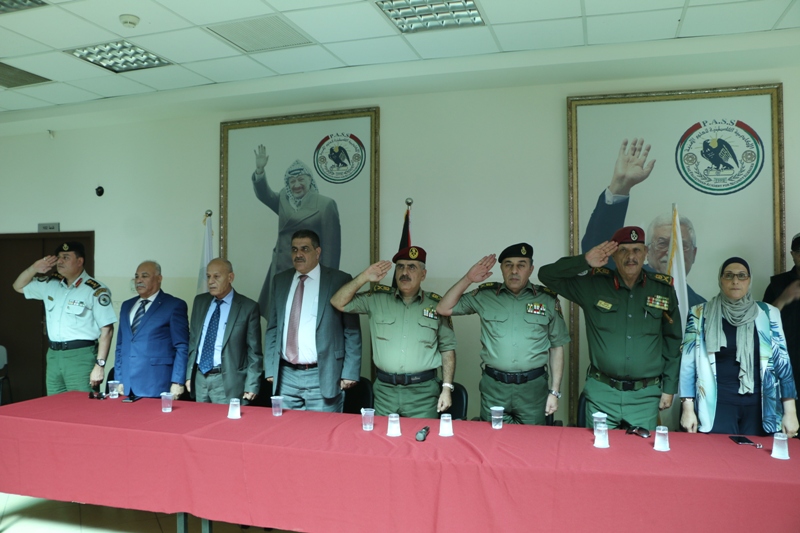 Wednesday, Al-Istiqlal University has opened, in partnership with the Military Training Commission and the Management and Administration Commission, a closed military training for the "new" students of the academic year 2017-2018, the number is about 450 students distributed on the undergraduate and diploma programs at the University.

In his speech, Dr. Abdel Nasser Qadoumi welcomed the attendants and the new students. He directed his motivating speech to the students, especially as they move from civilian life to military life indicating that this stage cultivates the student's personality, qualify them for life, promote self-confidence, and internal discipline.

He added that the university has its own internal laws and regulations that are applied on all students without exception with equality and justice. He asked students to follow and stick to discipline with maintaining good conduct in all situations during the university life.

He asked the students of the bachelor's degree to work hard for academic excellence because any student’s achievement less than 70% after the end of the first academic year, the student will be moved to the diploma program since the university is interested in distinguished and outstanding students.

For his part, Major General Yousef Dakhlallah, the Head of the Management and Administration Commission, expressed his happiness for the presence of the Commission for the first time in the closed military training. He considered this a result of fruitful efforts and positive cooperation with Al-Istiqlal University.

He addressed the new students to make more efforts and he pointed out that the beginning of their military and daily lives should be based on patience, tolerance and tender. This is considered the title of the transition from civilian to military life. He added that the Commission will maintain constant contact with the students during their academic career, after graduation and their involvement in working at the security institutions.

Major General Yousef Al-Helow, the Head of the Military Training Commission, talked about the standards of the "new students" selection. He expressed his pride in the official opening of the three-month closed military training which is divided into two parts: 45 day- closed training and 45 ordinary days.

In his speech, Major General Al-Helow advised his students to be patient during the training which is established to graduate officers able to "control and connect" and to work hard. He explained the reason for the withdrawal of a number of new students in the early days of training related to their impatience prompting them to sign a "withdrawal request".

Al-Hilu called on the parents and the Palestinian public not to pressure the students to withdraw. The closed military training is conducted according to a consistent policy that enhances the efficiency and professionalism of the students without restricted to a certain number. He wished success for all students without withdrawal till the end of the training.

The aim of the partnership between the IU and the Military Training Commission and the Management and Administration Commission stems from building the security institutions on strong basis which enables in performing duties towards the homeland and the citizen.