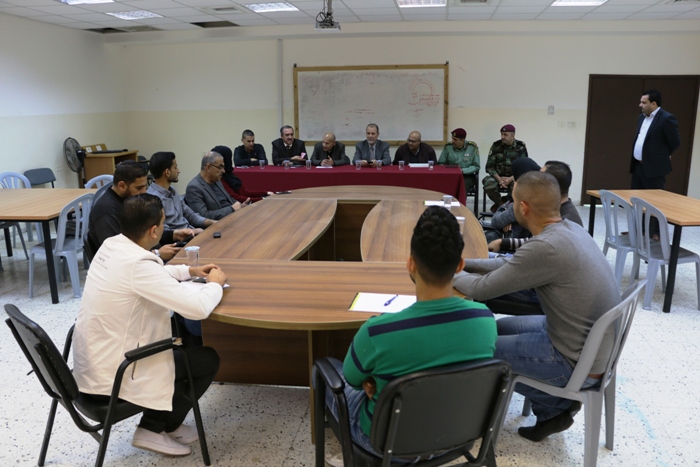 The Center for Community Service and Continuing Education at Al-Istiqlal University has opened a course in English Language - First Level for the academic staff. The course lasts until the end of the first semester. The course was opened in the presence of Dr. Ghassan al-Helow, the Military Deputy Colonel Salman Taysir Abdullah, the Dean of the Scientific Centers, the Head of the English Language Department and the Director of Public Relations.

The vice president for academic affairs welcomed the attendees and participants, wishing success to the participants in this course which contribute to improving the abilities of the staff in English language. He said that the University is ready to hold language courses that contribute to adding new skills.

For his part, Colonel Salman Taysir Abdullah said that the military are interested in developing their English language because of its importance in communicating with the foreigners. He wished that the English Department will hold a specialized course in security and military terminology.

In turn, the lecturer of the English course - first level Mr. Ayman Susu pointed out that this course aims to develop communication skills in English language and how to use the vocabulary and terminology used on a daily basis, in addition to the intermediate conversation in several fields and functions.

In the context, the Dean of scientific centers Dr. Mohamed Dabous said that learning a new language contributes to increasing self-confidence because it helps in developing the ability to communicate and interact with others.  The director of the Center for Community Service and Continuing Education, Sha’aban Ayat, added that English has become the language of the world and important in both scientific and practical levels.

The Center for Community Service and Continuing Education organizes a number of courses, especially in the field of languages, which contribute to developing the staff capacity and enhance their skills at work.