Al-Istiqlal University Receives a Delegation from the British Council 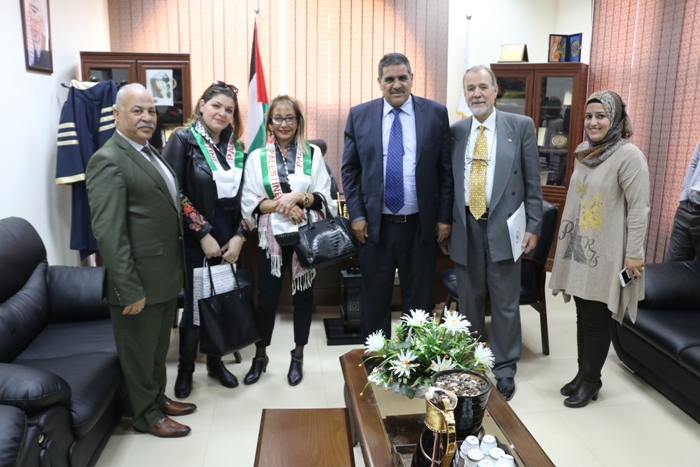 Al-Istiqlal University received a delegation from the British Council including Mirna Kessis, the Coordinator of the HESPAL Program, and Nadine Jarrar Seirafi, the exams coordinator at the Council.

The University rector, Dr. Abdel Nasser Qadoumi, welcomed the guests. He hoped that the cooperation between the University and the British council will be achieved; especially one of Al-Istiqlal University’s objective is capacity building.

During the meeting held in his office, Dr. Qadoumi presented a brief about Al-Istiqlal University, its administrative and academic development, and its membership of Arab, Islamic and international universities unions. In a comparison with equivalent universities in the Middle East, it is a distinctive institution due to teaching security, military and police sciences at the same time.

For her part, Mirna Kessis, the Coordinator of the HESPAL Scholarship, talked about the services and the Graduate Project which started in 2010 with the participation of 10 British universities and has now grown to become 39 universities in 2021. The program offers an opportunity for academics at Al-Istiqlal University to apply for full scholarships in the master's and doctorate programs.

After the meeting with the Rector, the two guests met the Vice Presidents for Academic, Administrative and Military Affairs in the presence of the Director of International Relations and a number of academics. They discussed ways and mechanisms for future joint cooperation.

In this context, the British Council Examiner Nadine Jarrar Seirafi explained what is required to take the IELTS exam, its features and the conditions of applicants, and what could be offered at the academic and practical levels.

At the end of the meeting, it was agreed to set a second meeting in the first half of next December to discuss the method of cooperation and common services, as well as informing the interested people on more details regarding the scholarship and IELTS.