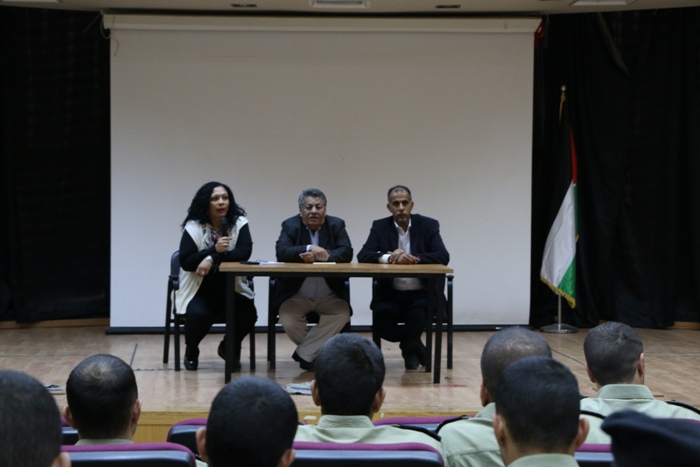 The Head of the Department of Security Sciences Dr. Ghassan Omar welcomed the guest and introduced him to the students before the start of the lecture, which lasted two hours in the presence of the course’s instructor Taghreed Abu Hamdeh.

Dr. Swailem introduced some important concepts in media as an introduction for talking about the Palestinian media and its role in influencing the public and drawing the required picture for the Palestinian issue since the emergence of the Palestinian media in all its forms, especially the traditional media, which includes newspapers, radio stations and up to modern media.

He mentioned the most prominent Palestinian media personalities who are known for their influence and their media work at both the Palestinian and Arab levels, such as Majid Abu Sharar and Ghassan Kanafani, who represent the bright image of hard work and sincere.

In the same context, the Executive Director of the channel, explained that there are (30) local radio broadcast programs and newsletters in Palestine, 11 Palestinian satellite channels in addition to thousands of news sites, as well as thousands of views and comments on social networking sites.

During the lecture, Dr. Sweilem pointed out the nature of the Palestinian public in terms of diversity and multiple interests, and the impact of modern media in forming a public base in terms of creating sufficient awareness of a particular issue, with the need for financial support and the appropriate environment.

The students were asked questions about their media interests, favorite TV channels and news sites, as well as their notices on the Palestinian official media and what they expect from it.

At the end of the lecture, MissTaghreed Abu Hamdeh, the instructor of Media Security Course, thanked Dr. Abdul Majid Sweilem for his valuable lecture and useful information for students. Ste wished repeating such lectures in the future.

It is worth mentioning that the Faculty of Humanities and its Dean Dr. Hussam Qadoumi, organize a number of meetings and lectures for students with media personalities, intellectuals and politicians, in order to enhance the skills of students and raise their level of knowledge and culture.

The Department of Security Sciences carries out a number of activities in partnership with national, official, and community institutions to develop and enhance students' knowledge and skills.