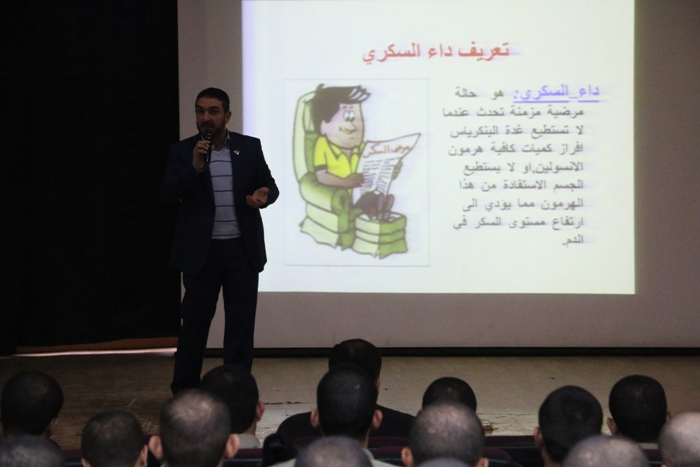 Wednesday, The Directorate of Health in the Governorate of Jericho organized an awareness lecture for students of Al-Istiqlal University on the occasion of the World Diabetes Week under the title "Diabetes and Women" at the University’s Theater.

The lecture was delivered by Dr. Saleh Abu Aba, Specialist of Glands and Diabetes at the Directorate of Health in Jericho. The lecture was organized by the Center for Community Service and Continuing Education at Al-Istiqlal University launching from the responsibility of awareness and health care, especially for women.

Dr. Abu Aba talked about the causes and symptoms of diabetes as one of the most prevalent diseases in the world, the number of people with diabetes is 360 million around the world and it is expected to reach 600 million in the coming years. This costs the budgets of the world about $ 245 billion annually.

As for people with diabetes in Palestine, Abu Aba said that Palestine has the lowest rates among the countries of the world suffering from this chronic disease. Despite the fact that the Palestinian Ministry of Health spends two-thirds of its budget in the treatment of the infected and complications caused.

And the students interacted during the lecture where the questions focused on the types of diabetes and how to prevent it, especially as it has spread in the world.

For his part, the director of the Center for Community Service and Continuing Education at the University Mr. Sha’ban Ayyat said that the university is concerned with health awareness of chronic diseases, especially related to women, and their awareness is necessary because the health of society is the health of women.

The Directorate of Health in Jericho, in partnership with the University of Istiqlal, organizes a number of annual events and lectures in a number of health topics to raise awareness and health culture, which is reflected on the health of society as a whole.