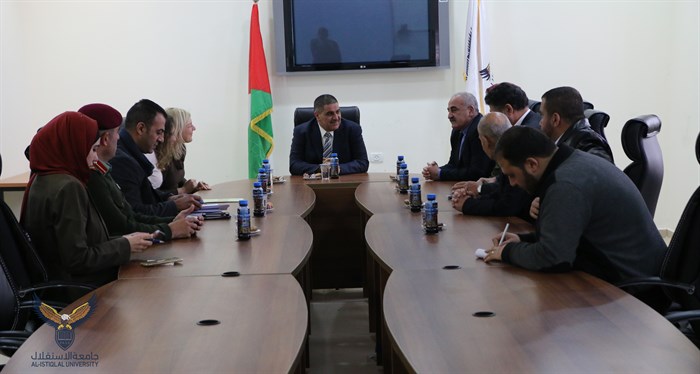 The German government representative ( GIZ) Marion Holtkin, the director of the Reinforcement of the Palestinian Police Structure Program, was welcomed on by Al-Istiqlal University.

Al-Qadoumi clarified the University's strategic objectives, and he talked about the higher education programs of the bachelor degree based on (7 specialties) which are distributed among three major colleges, in addition to the two- year diploma. All these contribute to improve the work of the security institution in Palestine.

The President of the University talked about the future plans of IU and the intention to work on establishing a number of projects and centers to serve the security institution. He also called on GIZ to support these projects and to achieve positive cooperation that will be reflected on the university and the Palestinian security establishment in general.

Marion Holtkin, thanked the University's president for her hospitality and expressed her admiration for the University. She said that it was her first visit after two-year residency in Palestine and working with the Palestinian police within the project “Reinforcement of the Palestinian Police”.

The two sides discussed future work projects, especially with regard to the project of the German institution in the Palestinian police force, and with what meets the role of Al-Istiqlal University in terms of professional and academic aspects. They also discussed developing the work through specialized courses in which the university grants acknowledged certificates.