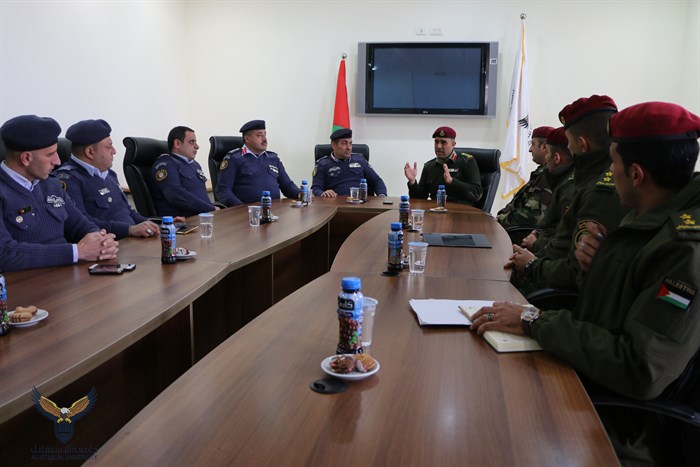 Monday, the President of the University, Dr. Abdel Nasser Qadoumi and his Deputy for Military Affairs, Col. Salman Taysir Abdullah, welcomed the Commander of the Air Force, Brig. Gen. Mohammad Taysir Abdullah, who visited the university with a number of officers of the air police.

Dr. Qadoumi hoped that the dream of establishing an independent Palestinian state will be achieved and have planes and airports on the Palestinian land. He called for joint cooperation between Al-Istiqlal University and the Air Police in order to serve the Palestinian security establishment and its sections through integrated work.

The Vice President for Military Affairs praised the Air Force, which is considered one of the most important components of the National Security Forces. Al-Istiqlal University seeks to organize joint work and systematic lectures for the University students about the Air Police and their units, especially as they have high potentials. He also talked about the military and field staff at the University and their readiness for implementing the tasks assigned to them.

For his part, Air Force Commander Brig. Gen. Mohammad Abdullah Tayseer Abdullah congratulated the Vice President for Military Affairs at the University for the New Position. He stressed his readiness to cooperate with the University and to introduce the Palestinian students to the Palestinian air force through professional and scientific cadres capable of providing a full image about the air police.

At the end of the meeting, the Commander of the Air Police presented a plaque of appreciation and congratulations to Colonel Salman Taiseer Abdullah on his assumption of the post of Vice President for Military Affairs. The delegation was then accompanied in a tour to the university facilities.