Workshop about the National Strategy for Combating Corruption in Palestine 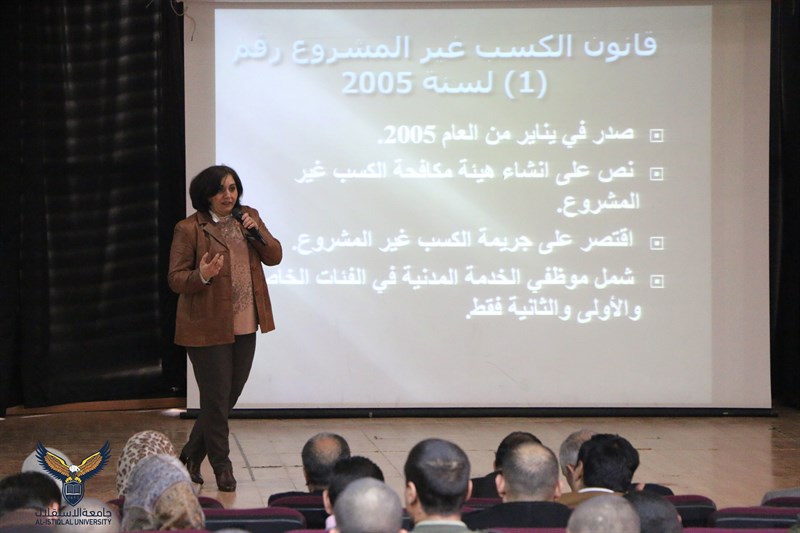 In cooperation with the Anti-Corruption Commission, the Faculty of Law, including its two departments, organized a workshop for the juniors under the title "National Strategy for Combating Corruption in Palestine" in the Theater of the University.

The workshop was opened by the President of the University. Dr.Abdel Nasser Qadoumi, who welcomed, on behalf of the Chairman of the Board of Trustees, TawfiqTirawi and the University's staff, the representatives of the Anti-Corruption Commission and their presence at the university. He said: " fighting against official corruption isin the financial and administrative matters, but it is originally diverse ranging from social, administrative and financial corruption, to all aspects of life," stressing that the fun of life lies in the contradictions Which remain constant over time.

Concerning combating corruption, Dr.Qadoumi said that it lies in two ways: laws and regulations as well as culture and awareness in order to develop morals and values construction. He touched on the modern anti-corruption approach that focuses on " governance universities" as one of the most important ways of punishing universities in the event of corruption.

For his part, Dr. Salahat, the Dean of Faculty of Law at the University, expressed his happiness to hold a workshop on the national strategy to combat corruption in the presenceof one of a leading institution in the State, the Anti-Corruption Commission. It seeks to promote the various authorities and raise the community's awareness towards the equal rights of people quoted from independence document which was drafted according to thePalestinian law.

Dr. Salahat called the students of the university to grab the chance and employ the workshop in developing their knowledge to combatcorruption, and buildthe state with its developed and honest institutions.

Dr. Hamdi Khawaja, delivered the speech of the head of the Anti-Corruption Commission Rafik Natsheh, who conveyed the greetings of the latter to the audience and the administration of the university, expressing his pride at the University and its students. He said that” the university has a national peculiarity enough for the whole Palestinian people to be free from the occupation.

He added that the Anti-Corruption Commission is for the Palestinian people and its national achievements are carried out in partnership with all institutions, especially educational institutions represented by universities. He pointed to the joint speech found in the speech of the President of the university and dean of Faculty of Law with the Anti-Corruption Authority. This is a proof of the national strategy to combat corruption.

For her part, the GeneralDirector of Legal Affairs of the Anti-Corruption Commission Rasha Amarna talkedin details about the legal system on which the Commission is based to combat corruption in Palestine. She explained the history of the anti-corruption laws that followed the Jordanian crimes law which is applied in the Palestinian territories. The lawwhich was drafted in 2005 and was amended in 2010. It was approved by the President of the Palestinian Authority, Mahmoud Abbas, by means of law - including persons and crimes not covered by the law of illegal graft. Moreover, members of Public Prosecution should be nominated to work for the Commission as a specialized institution. As well as establishing a specialized court to consider corruption cases.

The workshop included a number of lectures. Dr. Hamdy Khawaja delivered a lecture on the national strategy to combat corruption in Palestine, Dr. KhairyahYahya spoke in her lecture on the creation of policies to combat administrative corruption, in addition to public discussion and questions from students about the mechanism and the law of the Anti-Corruption Commission.

It is noteworthy that the Anti-Corruption Commissionhasadministrative and financial independence and privileges, and has a special budget within the budget of the Palestinian Authority and its employees are subject to a special system issued by the Council of Ministers, and the appointment of staff done by a decision of the Chairman of the Commission, and the President and members have immunity for all their work.