Graduating the students of the constituent military course, the tenth of Bachelor and the second of intermediate diploma in Al-Istiqlal University. 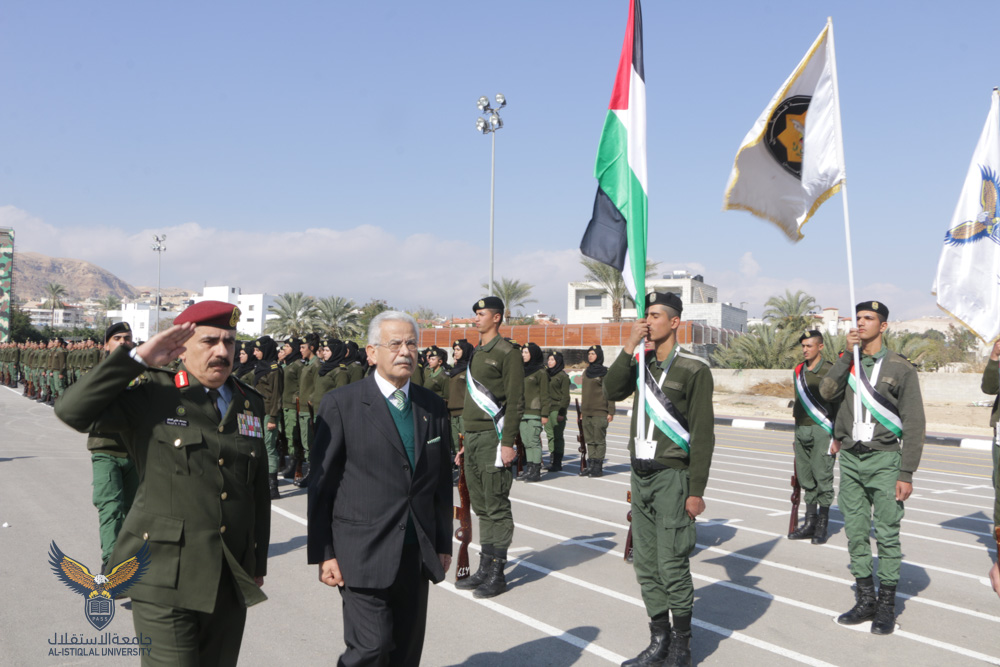 Military Training Body of the Security Forces graduated the students of the constituent course No. (30), the tenth of bachelor and their number was (203) students – the second of  intermediate diploma and their number was (246) students in al Istiqlal University, with the attendance of: the Head of the Military Training Commission Major General Yousef Al-Helou, Governor of Jericho and the Valleys Mr. Jihad Abu al-Asal, the President of Al-Istiqlal university professor Dr. Saleh Abu Osbaa with his deputies, assistants and the deans of the faculties, In addition to the leaders and managers of training in the security agencies with the families of the graduates in the theater of the martyr Salah Khalaf "Abu Iyad" inside the university campus on Tuesday, 29th of January 2019.

Professor Dr. Saleh Abu Osbaa welcomed the official attendance and the parents of the students at the graduation ceremony of Al-Istiqlal university and thanked the military training and the National Security Forces for their efforts during four months of training. He also said “What the constituent course achieved is the establishment of a committed human being, disciplined and belonging to Palestine under the conditions of a brutal occupation trying to obliterate the rights of our people and steal our history and our land”. Also he addressed the parents of the students who entrusted their children in Al- Istiqlal University to be more educated, knowledgeable and committed to serve their country Palestine.

The Governor of Jericho and the Valleys conveyed the greetings of President Mahmoud Abbas to the audience and his congratulation to the graduate students, praising their efforts which would not have been achieved without the efforts of the Military Training Commission and the University of Al-Istiqlal, which always strives to excel in the graduation of members and officers of the Palestinian security agencies wishing success to the students in their lives and their scientific journey to obtain the degrees of bachelor and intermediate diploma.

The head of the military training Commission Major General Yousef Al-Helou and on the behalf of the Interior Minister Dr. Rami Al-Hamdallah praised the graduates and their efforts exerted during the past four months through receiving their physical training, both bachelor students at the headquarters of the agency and the students of the average diploma at the National Security headquarters, with expressing his pride of Al-Istiqlal University and its scientific and structural development.

Furthermore, Major General Yousef Al-Helou extended his greetings to President Mahmoud Abbas and his political efforts and support, especially on the level of the security agencies, which will remain the protective shield of the homeland. Also he addressed the graduating students, that they are now moving from the basic training stage to the academic education stage to be committed and disciplined.

Finally, the ceremony included various and comprehensive military parades, for the graduating students, which they received during the training period, in addition to the landing section from the military tower, the arts of collective and individual fighting and the overpassing of the fire barriers that show the strength, movement and the high concentration of the graduating students.