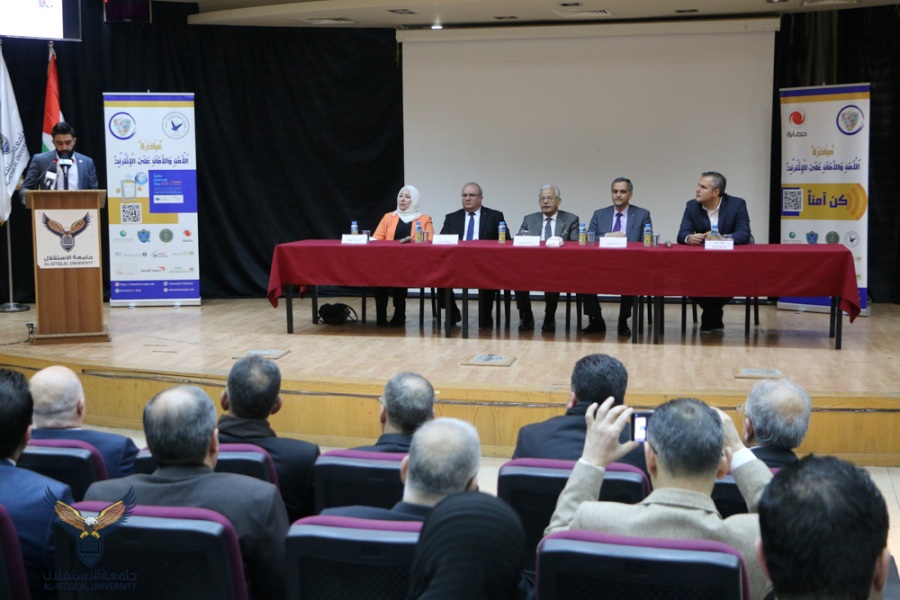 On the occasion of the International Day for Internet Safety, a press conference was held at “Sheikh Hazza Bin Zayed” Theater in Al-Istiqlal University, on Monday 4th of February 2019, to launch the "Internet Security and Safety" marathon which will be implemented in the mid of February 2019.

The press conference included Dr. Allam Mousa, the Minister of Communications and Information Technology, Dr. Ibrahim Al Shaer, the Minister of Social Development, Prof. Dr. Saleh Abu Osbaa, President of Al-Istiqlal University, Mr. Alfred Noria, the Regional Director of Vision International Institution and Dr. Saeda Afouna, the Rapporteur for the Initiative’s Preparatory Commission with the presence of the partners and supporters of the initiative.

The press conference was opened by Prof. Dr. Abu Osbaa, the President of Al-Istiqlal University which will host the initiative on Friday 15th of February 2019. He welcomed the official and media presence, praised the importance of "Internet security and safety" initiative and its sponsors and supporters wishing that it will promote the safe use of the Internet.

For his part, Dr. Allam Mousa, the Minister of Communications and Information Technology, thanked Al-Istiqlal University and the organizers of the initiative which coincides with “the Palestine International Day of Safe Internet” and he officially announced the start of the celebration from Jericho, the City of Moon, through the marathon on Friday 15th of February 2019.

Also, Dr. Mousa talked about the electronic crimes that inflicted the children of Palestine and the world over the past year, as a result of the negative use of the Internet, stressing the keenness of his ministry to achieve the electronic security for the Palestinian citizens especially in the light of the issuance of the “cybercrime law” and pointing that the government has to provide safe Internet for the Palestinian families.

In a related vein, Dr. Ibrahim Al Shaer, the Minister of Social Development, expressed his pleasure to participate in the initiative’s conference, stressing its importance which comes at a time when the Palestinians are increasingly using the Internet network and that such use should be safe - and a constructive tool - not a demolition.

Moreover, Dr. Al- Shaer said it is necessary to take practical and appropriate steps, by strengthening the Internet surfing messages which attract the children and satisfy their interests, mentioning the important role of the Palestinian family in the right guidance and education that decrease the misuse of some websites.

In turn, Dr. Saeda Afouna, the Rapporteur for the Initiative’s Preparatory Commission, talked, on the behalf on An-Najah National University, that this year carries the slogan (Together towards secure Internet) on the occasion of the World Day of Safe Internet. Also she presented the initiative vision, which began in the last year 2018, and the continuation of the events and activities at the academic and community levels to raise the awareness of the negative effects of Internet’s misuse which resulted (bullying, extortion, electronic harassment and other negative behaviors).

In addition, Mr. Noria, the Regional Director of Vision International, stressed the importance of the Internet in human life and its use in building the world through developing its positive factors and trying to overcome the negative effects in the cyberspace, noting that there is a need for awareness workshops targeting children directly and they are preparing to work on this idea in the middle of this year.

At the end of his speech, Mr. Noria emphasized the importance of the Marathon with the participation of the academic institutions and in the presence of official and sovereign institutions, wishing success to the participants in this initiative.

It is noteworthy to say that the organizers of this initiative are ten (10) official and social institutions which aim to protect community members, especially children and young people, from potential risks arising from the misuse of the Internet Network in general and the Social Media in particular. The initiative was launched officially in conjunction with the celebration of World Internet Day on 6/2/2018 to form a sustainable collective action to safeguard the Palestinian social cohesion and its relationship with the global community.