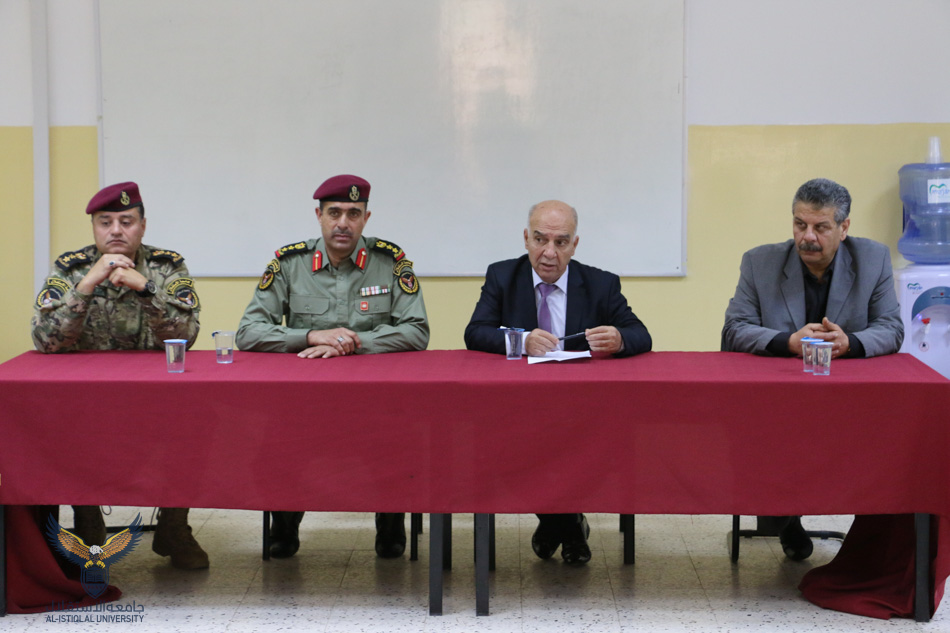 On the sidelines of graduating Al-Ibrahimi Mosque’s Guards, HE Maj. Gen. Tawfiq Al-Tirawi, the Chairman of the Board of Trustees of Al-Istiqlal University, welcomed Maj. Gen. Adnan Al-Damiri, the General Political Commissioner, in the presence of Prof. Dr. Saleh Abu Osbaa, the President of Al-Istiqlal University, with his deputies for military, academic and administrative affairs, Wednesday 6th of February 2019.

After the meeting, Maj. Gen. Al-Damiri held a lecture for the Guards of Al-Ibarhimi Mosque, who were participated in the qualifying course, in a cooperation with the Political Guidance Committee, the Ministry of Awqaf, the National Security Forces and Al- Istiqlal University, noting that the course was held since the beginning of this week and its goal is to maintain good communication with the public, Mosque’s leaders and protect it from vandalism.

For his part, Col. Salman Tayser Abdallah, the Vice President of Al Istiqlal University for Military Affairs, welcomed Maj. Gen. Al Damiri praising his efforts at both the political guidance and media of the security establishment and wishing the participants to make a good use of the course.

Furthermore, Maj. Gen Al- Damiri thanked all the participants of the course which is held for the first time for civilians, especially that the security awareness is important for every citizen, giving his advice to the Guards of Al-Ibrahimi Mosque in terms of the importance of the Palestinian religious and historical sites, how to deal with the media and other important matters.

He added that they should protect the Mosque by a solid work plan, being armed with determination, especially that they don’t have weapon, and the importance of the event’s documentation in accordance to an information bank linked to legal and administrative bodies.