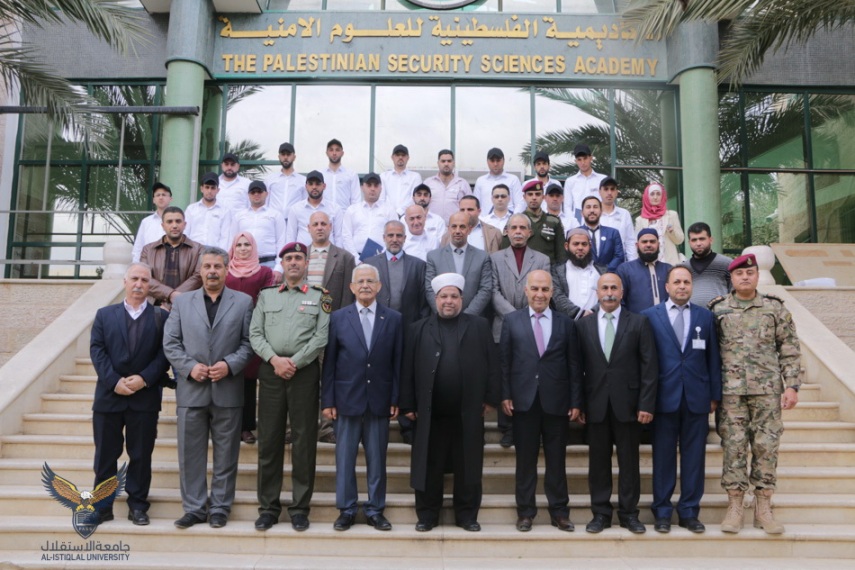 Al-Istiqlal University in partnership with the Political Guidance Authority, the Ministry of Awqaf and the National Security Forces graduated the participants of the qualifying course for Al- Ibrahimi Mosque’s Guards, in the presence of Prof. Dr. Saleh Abu Osbaa, the President of Al-Istiqlal University, Dr. Yousef Daes, the Minister of Awqaf and Religious Affairs, and Maj. Gen. Adnan Al-Damiri, the General Political Commissioner, at “Sheikh Hazza Bin Zayed Al Nahyan” Theater inside the University, Wednesday 6th of February 2019.

HE Maj. Gen. Tawfiq Al-Tirawi met Dr. Yousef Daes, the Minister of Awqaf and Religious Affairs, before the graduation ceremony and discussed the ways of joint cooperation and the possibility for using “waqf lands” for exploitation in joint projects that benefit the public interest.

At the beginning of the ceremony, Prof. Dr. Saleh Abu Osbaa said that Al-Istiqlal University is proud of its partnership and efforts to ensure the success of this important course at the level of protecting the Holy Religious Places, sending his greetings to the graduates.

In that context, Dr. Yousef Daes thanked Al-Istiqlal University, which is represented by Maj. Gen. Tawfil Al-Tirawi, the Political Guidance and all the partners in the training course, which lasted for a week and included (17) Guards, noting the repeated attacks by the occupation army and its settlers on the Palestinian religious sites in general and Al- Ibrahimi Mosque in particular.

For his part, Maj. Gen. Adnan Al- Damiri said “My private and public dream is achieved by the establishment of Al- Istiqlal University, which preceded time and now it is considered as the first Palestinian and Arab University” especially that in the Arab world there are no security universities, but specialized colleges only, giving his thanks to the presidency, represented by Mag. Gen. Tawfiq Al-Tirawi, of what they have done to make the training course successful.

Furthermore, Al- Damiri conveyed the greetings of President Abbas to all the participants in the training course, and said next time there will be a similar course for the guards of Al-Aqsa Mosque.

At the end of the ceremony, the Minister of Awqaf and Religious Affairs presented a shield of appreciation to Al-Istiqlal University represented by its president Prof Dr. Abu Osbaa, the Director of Training and Development Institute, represented by the Col. Majdi Serdah, the Political Guidance represented by Maj. Gen. Adnan Al-Damiri, and certificates were distributed to the participants of the course.