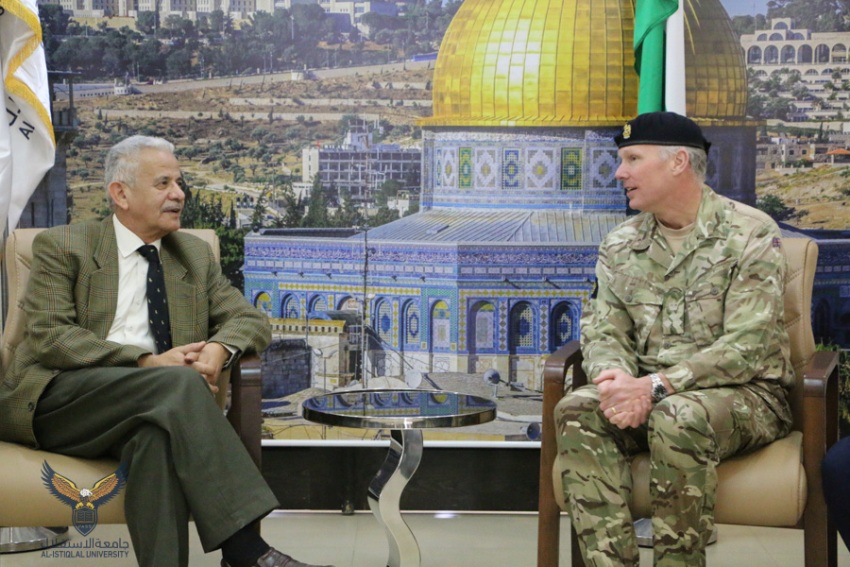 Prof. Dr. Abu Osbaa, the President of Al-Istiqlal University, welcomed the British General Doug Gibson, the responsible for the British Support Team, accompanied by Col. Mark Claidon, the Academic Adviser of the Team, in the presence of the Vice Presidents of the University for Military and Academic Affairs and the Director of International Relations, on Sunday 17th of February 2019.

Furthermore, Prof. Dr. Abu Osbaa praised the joint cooperation and the courses which are carried out by the British Support Team at the University for the trainers and students, wishing continuous progress for the future generations.

The two parties stressed the need to continue the policy of integration between the military and academic, which strengthens the relationship between them, especially in an appropriate environment which is achieved in the campus of Al-Istiqlal University due to its facilities and the areas of training.

After the meeting, Maj. Gen. Mohamed Haron, the Director of the International Relations Department, accompanied the guest and his academic advisor in a tour to follow the activities of the leadership course, which already started its second phase this month with the British Support Team and the Palestinian Team in Al-Istiqlal University.