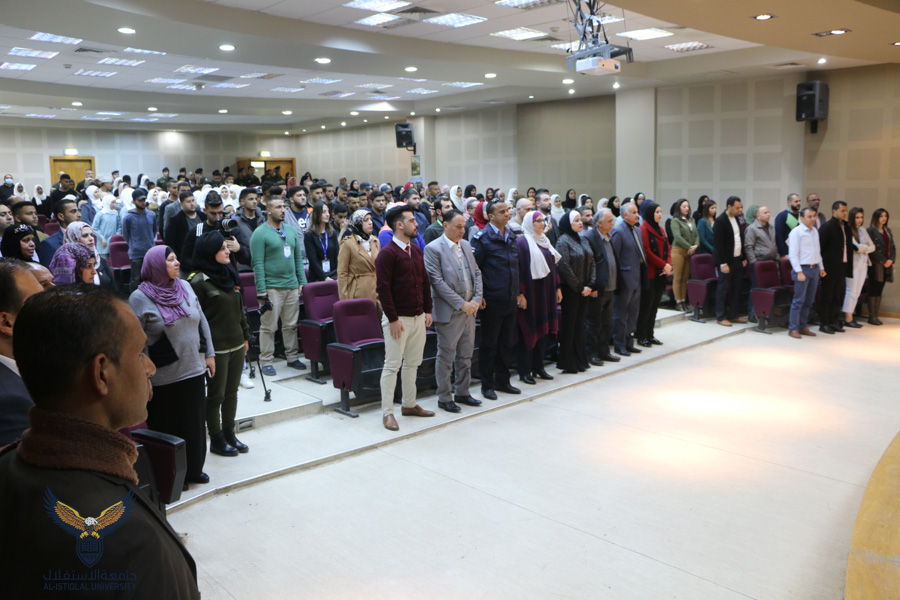 Al-Istiqlal University hosted the high school students of INJAZ, in Jericho and the Valley Governorate, in the presence of around 20 representatives of universities and educational institutions within the activities of the orientation days, Ambassadors of creativity, which are organized in all governorates of the country.

Prior to the reception of INJAZ program, there was an official opening for the activities at the theater of “Sheikh Hazza bin Zayed Al Nahyan”, in the presence of Prof. Dr. Saleh Abu Osbaa, the President of the University, Dr. Azmi Balaona, the Director of the Directorate of Education in Jericho, Mr. Ayman Hodali, the representative of the Minister of Higher Education and Mr. Salem Ghrof, the Mayor of Jericho.

Prof. Dr. Abu Osbaa welcomed the representatives of the Ministry of Education, Universities, the educational institutions, schools and the activities in  Jericho and the Valley governorate, in the University of Al-Istiqlal, expressing his pride in the presence of this number of Palestinian universities, which contribute in building the country and the citizen, directing his speech to the students of INJAZ to invest this meeting for choosing the university and specialization that suits their ambition and future, and wishing them success.

For his part, Dr. Azmi Balaona, the Director of Education in Jericho, delivered the greetings of the Minister of Higher Education to the students of INJAZ in the governorate of Jericho, expressing his pride in all those who contributed in conducting the orientation days and their advices on the specializations in all the Palestinian universities and educational institutions, which are around (20).

Furthermore, Mr. Salem Ghrof, the Mayor of Jericho, sent his greetings to the Al-Istiqlal University, the Ministry of Education, the universities, colleges and the Palestinian educational institutions for their efforts on conducting the orientation day, wishing them progress and success.

Finally, the President of Al-Istiqlal University and the Director of Education in Jericho exchanged the “shields of appreciation” for their efforts and support for the educational process and the guiding days in Palestine. After that, the attendees of the event and the students of INJAZ went to the field of Martyr Salah Khalaf to see a military parade conducted by the students of Al-Istiqlal University.