A security workshop on the Israeli rumor against the Palestinian people 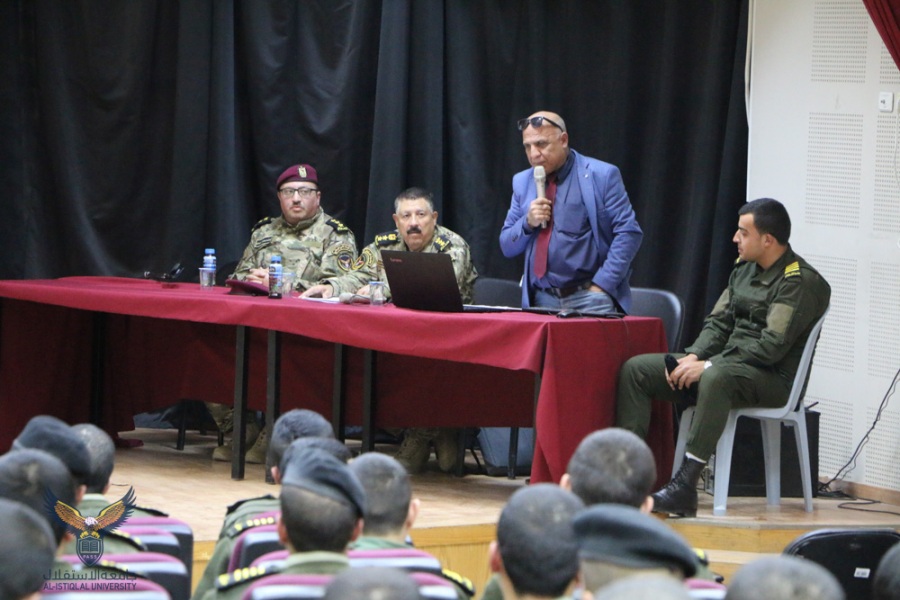 Upon instructions from Col. Salman Taysir Abdullah, the Institute of Training and Development, in cooperation with the Department of Security Affairs at the Al-Istiqlal University, organized a security workshop entitled "The Impact of the Israeli Rumor on the Palestinian People, in Peace and Warfare" to the fourth year students of security science and psychology, in the presence of Col. Khaled Ateeq and Col. Dr. Majdi Serdah at the University Theater on Wednesday and Thursday 6,7th of March 2019.

Col. Khaled Ateeq welcomed the supervisor of the security workshop Dr. Yousef Qassem, provided the students a brief introduction about his academic life and his scientific research in the field of security, mentioned the importance of the workshop for the fourth year students especially that it comes as an important stage in their lives before their graduation and joining the ranks of the security institution.

Dr. Kassem discussed several topics and themes during the workshop, most notably: (Rumor, its types, its psychology and effects in several areas, Zionist mythology as a rumor of the submersible type and examples on it from the Talmud and Torah, a proposed project for the role of security in facing rumors).

Moreover, the workshop was divided into five stages and students participated in a comprehensive scientific discussion about the workshop's contents and its security impact on their daily work, in light of the new data and ongoing Israeli psychological warfare.

It is noteworthy to mention that this workshop is an extension of a series of sessions, organized on the security, military and police sciences, for the students of the fourth year in all academic disciplines.