The President of the University meets the Departments’ Staff of Maintenance, Services, Transport and Agriculture 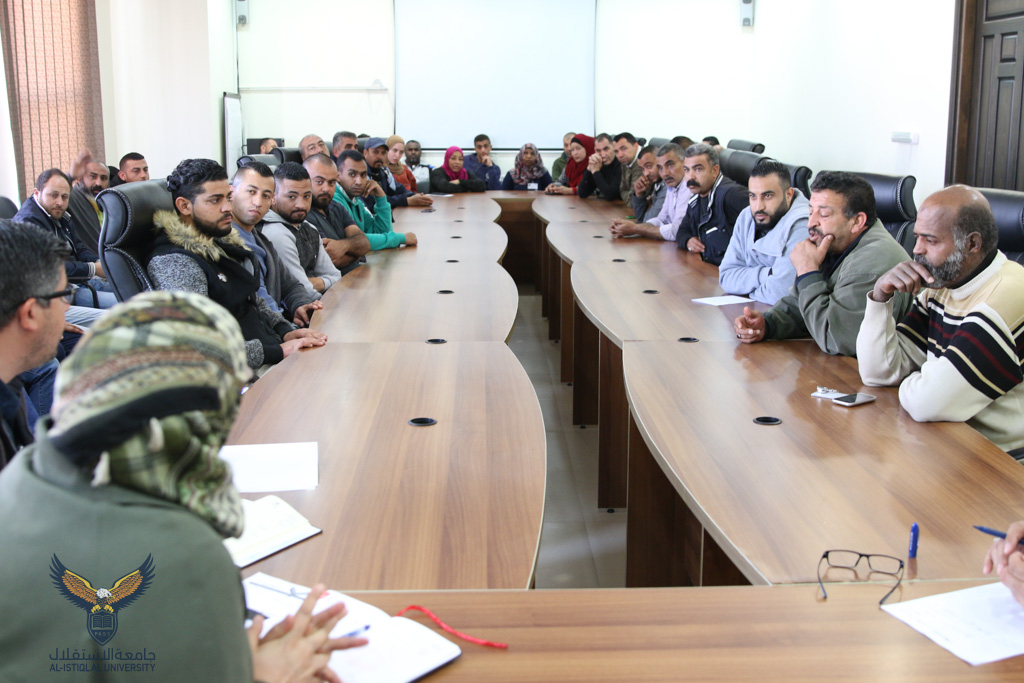 During his follow-up of the daily work of all the departments and faculties of the University, Prof. Dr. Saleh Abu Osbaa, the President of the University, held an administrative meeting with the directors and staff of the maintenance, services, transport and agriculture departments, in the presence of Dr. Rajaa Sweidan, his deputy for Administrative and Financial Affairs, and Col. Salman Tayser Abdllah, his deputy for Military Affairs, on Tuesday 12th of March 2019.

The President of the University welcomed all the staff members from the different departments, thanked them for their daily efforts in serving the University and its facilities, and stressed the need to comply with the law and the administrative instructions, listening to their observations and problems and answering their questions about the working conditions and career prospects.

At the administrative level, Dr. Rajaa Sweidan stressed the need for all employees to adhere to the daily instructions and work according to the law of vacations and departures during the working hours, and commended the employees to make efforts for receiving the employee award which was announced by the University’s presidency in February 2019.

Moreover, Dr. Sweidan mentioned the importance of communication between the four departments to meet the requirement of the employees, with quick response, in the different departments and performing the work collectively according to the management plan which is based on teamwork.

In the context, Col. Abdullah stressed that the University of Al-Istiqlal has military identity, calling the employees to perform their duties properly, thanking all of them for the quick response to the daily work in the fields of Maintenance, Services, Transport and Agriculture which are always under pressure and emergency.

Finally, the President of the University, his deputies and assistants, held a series of periodic meetings with the employees in the different departments and colleges, to follow up the progress of the plan which was organized by the presidency of the University.