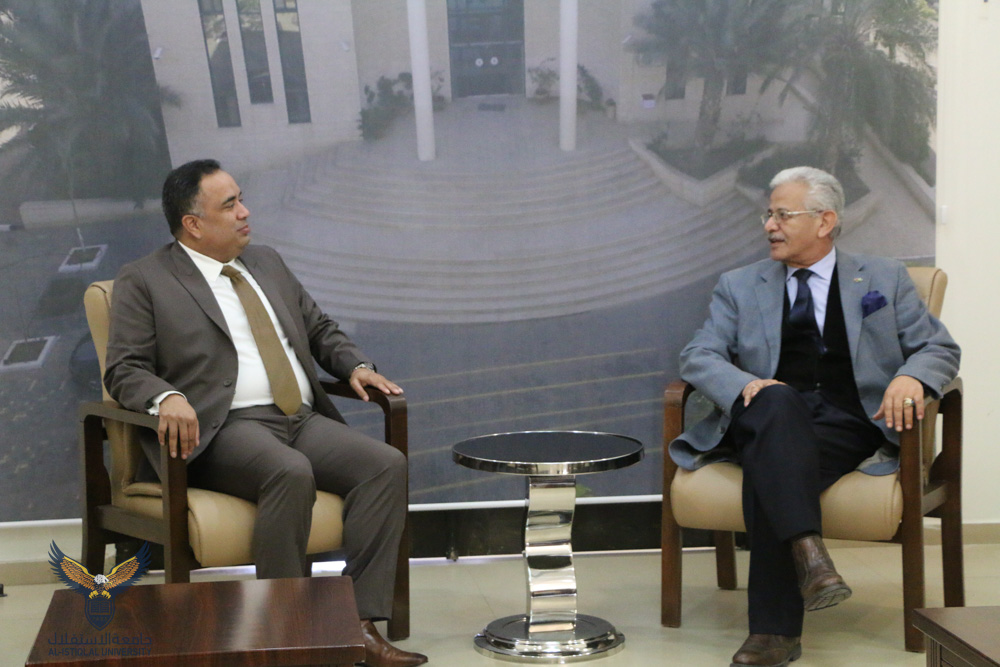 Prof. Dr. Saleh Abu Osbaa received Mr. Sonael Komar, the Indian Ambassador and his accompanying delegation in the presence of the Vice Presidents for Academic, Military, Administrative and Financial Affairs, the deans of the faculties and the Director of International Relations at the University, on Sunday 17th of March 2019.

Prof. Dr. Abu Osbaa welcomed the the Indian Ambassador and his accompanying delegation, presenting an introduction about the University and its future aspirations at the academic and construction levels, hoping a joint cooperation in the several common issues especially that India and Palestine have a historical relations in general and on the scientific ties in particular.

Furthermore, the University's president stressed the university's need for three PhD specialties in English language, information technology and information security especially that the next plan is to establish the College of Information Technology, hoping that the Indian Embassy will contribute in transferring the Indian scientific expertise through having bilateral agreements with Indian universities.

For his part, the Indian Ambassador thanked the President of the University and the Working Group for the good reception, expressing his country's readiness to cooperate in all the scientific fields with Al-Istiqlal University, pointing that his country offers annual scholarships to the Palestinian students in all disciplines, hoping to achieve joint cooperation with the University.

At the end of the meeting, the Indian Ambassador gave a souvenir to the President of the University and went with his accompanying delegation in a tour with Maj. Gen. Mohammed Haroun, the Director of International Relations, to the facilities and faculties of the University.