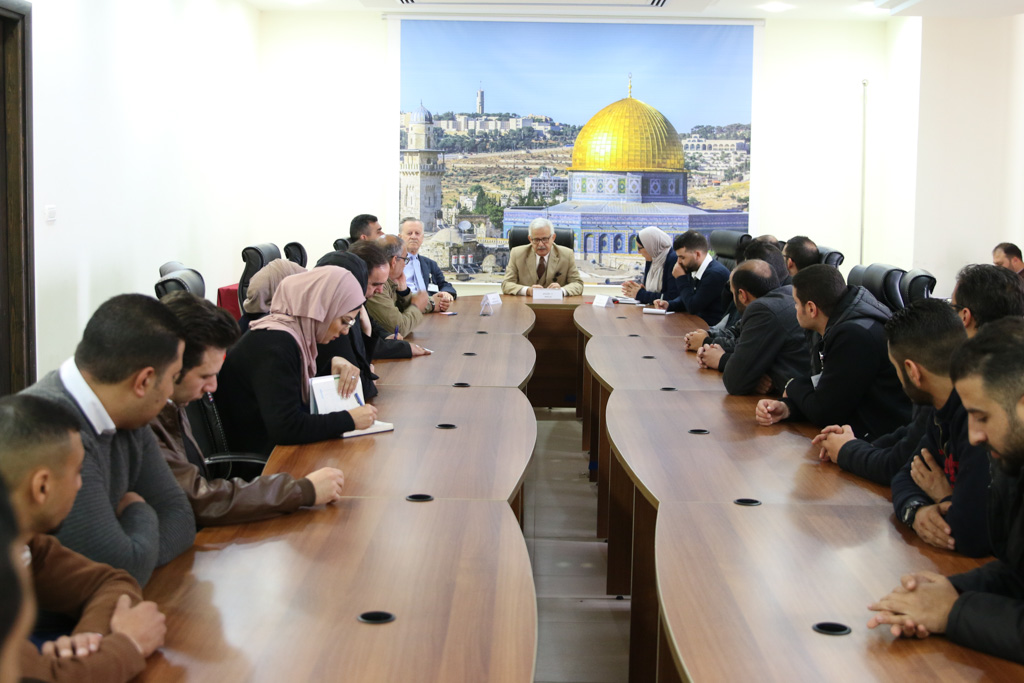 Prof. Dr. Saleh Abu Osbaa met the directors and staff of the Human Resources and Information Technology departments in the presence of his three deputies for academic, administrative, financial and military affairs, on Saturday 16th of March 2019.

Prof. Dr. Abu Osbaa thanked the staff of both departments for their efforts and said that the departments of Human Resources and Information Technology among the most important departments in the University, especially that the core of their work is to follow up the files and the daily practical needs for the employees, stressing the need of working collectively and performing duties as planned, in the light of the political and financial crisis facing the Palestinian leadership in terms of the piracy on the funds and its reflection on the salaries.

In this context, Prof. Dr. Muaweya Ibrahim expressed his happiness with the meeting which comes with two important departments which serve the academic process and improve its outputs, calling the staff to develop themselves and their career skills, especially in the light of the new administrative development and the incentives which were announced by the Presidency of the University.

Furthermore, Dr. Rajaa Sweidan, the Vice President for Administrative and Financial Affairs said that this regular meeting comes within the framework of the University with the employees, pointing to a number of administrative issues, especially the commitment to the daily and official hours and vacations process, thanking the Human Resources Management in developing the work through the INSAN Program which enables the employees to communicate electronically at all administrative matters, which reduces the effort and invest in time.

Also, she praised the work of the General Directorate of Information Technology through the establishment of special electronic programs which have positive impact on the administrative work at the University and eliminate the centralization to facilitate the communication between the employees, departments and colleges.

For his part, Col. Suliman Tayseer Abdallah, the Vice President for Military Affairs, stressed the need for steadfastness of staff in light of the current crisis, which requires great efforts and positive collective work.

During the meeting, the President of the University listened to the employees' comments and answered their questions regarding the working hours and the annual leave which will not be the same like the past years, so the employees will be able to choose the majority of their vacations during the year and some employees asked about working contracts, incentives, rights, health insurance and other labor-related issues.

At the end of the meeting, the president of the University wished all the employees the best of luck during the coming period in light of the current situation and emergency plan announced by the government, especially on the financial level, stressing that the presidency of the University is studying all possibilities for the continuation of the educational process for students, as well as the staff and their commitment in work.