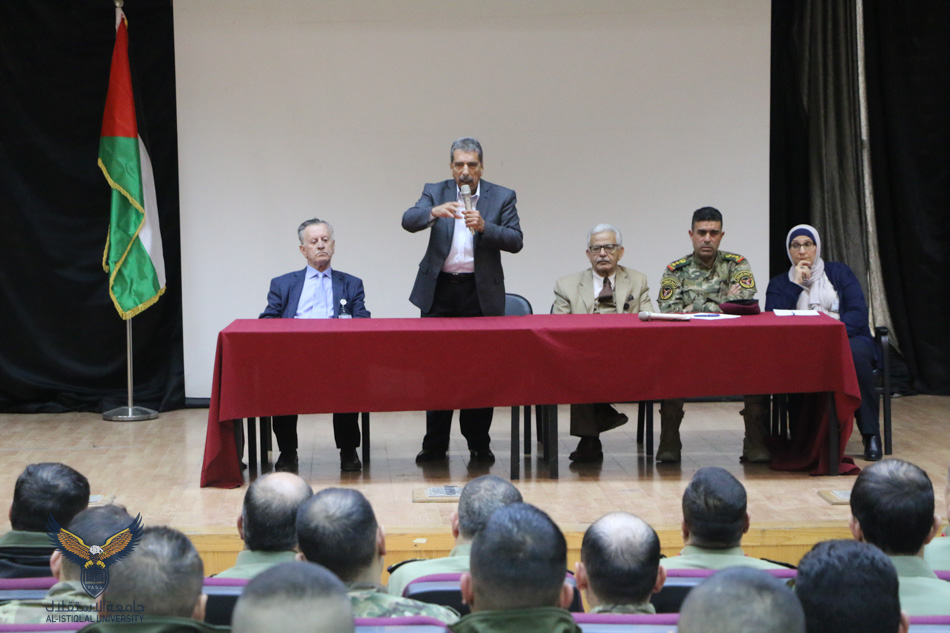 HE Maj. Gen. Dr. Twafiq Tirawi, the Chairman of the Board of Trustees of Al-Istiqlal University, and the Prof. Dr. Saleh Abu Osbaa, the President of the University, with his deputies for military, academic, administrative and financial affairs met all the members of the military and security staff at the University, in the theater of Sheikh Hazza bin Zayed, on Saturday 16th of March 2019.

In turn, HE Maj. Gen. Dr. Tawfiq Tirawi saluted the University officers, especially the female officers, at the academic and social levels, pointing the difference between the military and security disciplines in terms of theoretical science and the tasks assigned to each of them and how the University worked to unify the reference for military and security specialties which are now affiliated with the Vice President for Military Affairs.

Furthermore, he stressed the need for all officers to respect the military rank and size and how to preserve the prestige and honor of the military rank through the daily actions and with dealing with the internal and external society, mentioning that error is prohibited, stressing that the task of the officer is to preserve the homeland and its assets, as well as the name of Al-Istiqlal University which have to remain high.

For his part, Prof. Dr. Abu Osbaa stressed the importance of the meeting and its main objective which is listening to the employees, their needs and their inquiries. Also, he said: "Your presence today as united security and military wings is an important achievement for the unity of decision and reference in the University” which facilitated the communication for work achievement, especially the issues between the academics and officers.

On a related matter, Prof. Dr. Muaweya Ibrahim, the Vice President for Academic Affairs, said that the academic ambition of the officers at the University, is largely justified, and it must be achieved through the need of the University and the deployment abroad, adding that the advantage of the University is to prepare the officers in the academic aspect through the various disciplines and programs offered, for the programs of the bachelor and the intermediate diploma.

Finally, the President of the Board of Trustees, the President of the University and his deputies listened to a number of inquiries, which are summarized in the military ranks and its equivalence in the higher academic degrees, as well as the privileges and specialized courses for the military and security staff, who are working at the University, to develop the work properly.