A fruitful meeting between the President of the University with the Departments of Media, Public and International Relations 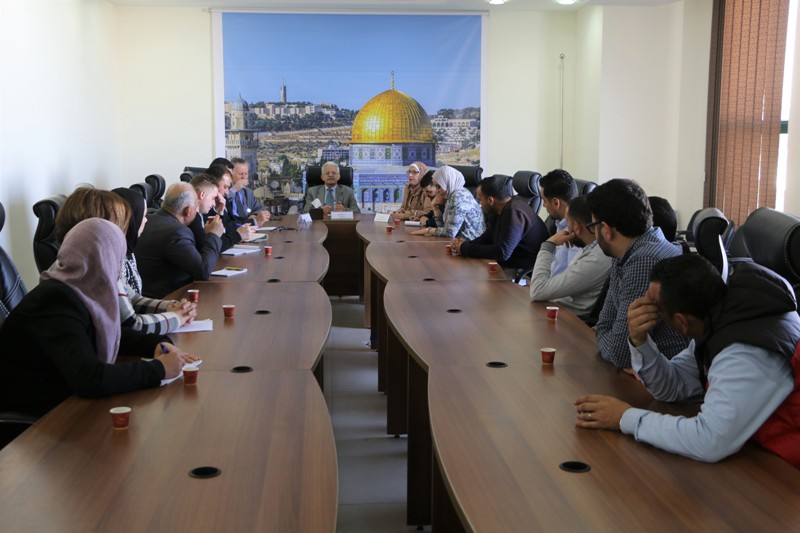 Prof Dr. Saleh Abu Osbaa, the President of the University, and his deputies for Administrative, Financial, Academic and Military Affairs, held a special meeting with the departments of Media, Public and International Relations, in the presence of the directors and employees of both departments, on Wednesday 20th of March 2019.

Prof. Dr. Abu Osbaa praised the efforts of the staff of the Media and Public Relations Department in covering the initiatives and the activities of the University and delivering the image to the local and international communities, stressing its great role in the communication with the local civil society institutions, noting that the Presidency of the University meets the needs of the Department in terms of increasing number of its professional staff as soon as possible to deliver its message wider.

Furthermore, Prof. Dr. Abu Osbaa praised the suggested ideas by the Department in terms of coordination with the local and international media by holding expanded meetings which serve the message and the vision of Al-Istiqlal University, besides his readiness to invite and meet the editors and the representatives of different media, hoping more success and unique achievements.

For his part, Prof. Dr. Muaweya Ibrahim, the Vice President for Academic Affairs, stressed the role of the Media and Public Relations Department in delivering the message of the University to the internal and external communities, pointing how to address the internal issues and marketing them to the local and external communities, as confirmed by Dr. Rajaa Sweidan, the Vice President for Administrative and Financial Affairs at Al Istiqlal University, thanking the directors and employees of both departments.

On the same vein, Col. Salman Tayseer Abdullah, the Vice President for Military Affairs, , said that the Media and Public Relations Department is one of the most important departments of the University because it is the author of the message and has the tools to deliver it to the local community, praising the accuracy of the news and its importance in reaching the citizens daily by publishing on the University website, social media, and the local media as well, giving special thanks to the director and staff of the department.

In turn, Ms. Alaa Shanti, the Director of the Media and Public Relations Department, expressed her happiness in this fruitful meeting which involved many critical issues at the levels of staff and the necessary needed equipment for the development of the work, giving a briefing about the recent achievements of the staff daily work, proposing to develop a special protocol process for Al-Istiqlal University to organize and carry out the work in the appropriate manner and in accordance with its internal and external image.

During the meeting, a number of important issues were discussed, which have a positive impact on the development of the media work in conveying the message of the University and its vision to the outside world, through daily news coverage by Multi-Media, publishing news on the website and social media, besides the development of the media discourse of the University officials all in his position and maintaining the visual identity and its requirements, inside and outside the University.