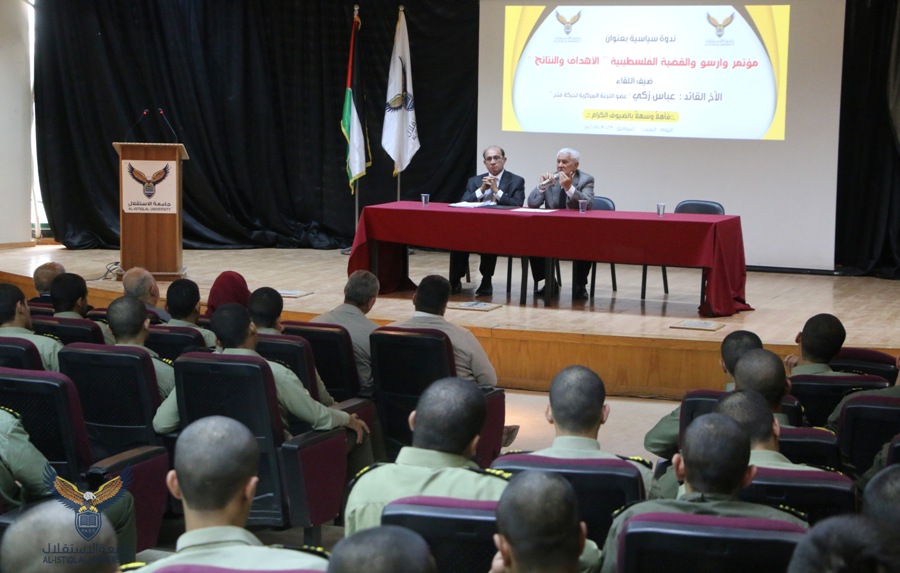 The Faculty of Humanities at Al-Istiqlal University, hosted Mr. Abbas Zaki, a member of the Central Committee of Fateh Movement and the Commissioner-General of the Arab Relations and People's Republic of China, in a national seminar entitled "Warsaw Conference and the Palestinian Cause, Goals and Results" at the Sheikh Hazza Bin Zayed Theater, on Saturday 23th of March 2019.

Dr. Nezam Al-Abassi, the Dean of the Faculty of Humanities, welcomed Mr. Zaki as an important political source and reference, providing the students with an overview of his struggle and political life, pointing that this day comes in March which combines the days of women, mothers and Al- Karameh battle.

Furthermore, Mr. Zaki expressed his happiness at the meeting and said “How happy I am to meet the brave male and female students of Al-Istiqlal University”, sending his greetings to the mothers and the families of the Palestinian martyrs.

He started his lecture by talking about the Palestinian National Liberation Movement (Fateh) and the principles that unite its members and leadership, presenting the Palestinian revolutions and the Battle of Al- Karameh in 1968, as one of its participants, and how the Palestinian militants fought for 16 hours and defeated the Israeli occupation after the setback of 1967.

Also, he reminded the students of the history and actions of the martyred Leader Yasser Arafat, and his wisdom in running the battle of Al-Karameh with hundreds of Palestinian revolutionists and achieving victory over the occupation state which made the Palestinian revolution moves from the political isolation to the leadership in all fields.

As for the Warsaw Conference and its results, Mr. Zaki said that this conference was a cover for the implementation of the “Deal of the Century” in the presence of about 80 countries, including 10 Arab, and boycotting the conference thwarted the plan against the Palestinian people which made the participants discuss other issues such as the fighting with Iran and other issues related to the Middle East, considering the conference as a new failure for Trump’s administration, which supports the Israeli occupation against the Palestinian cause.

At the end of the Symposium, Mr. Zaki greeted the Palestinian people in all places, especially in Gaza Strip whose children face daily attacks by Hamas militias, calling them to respond to the demands of the people and not to suppress and silence their voices.