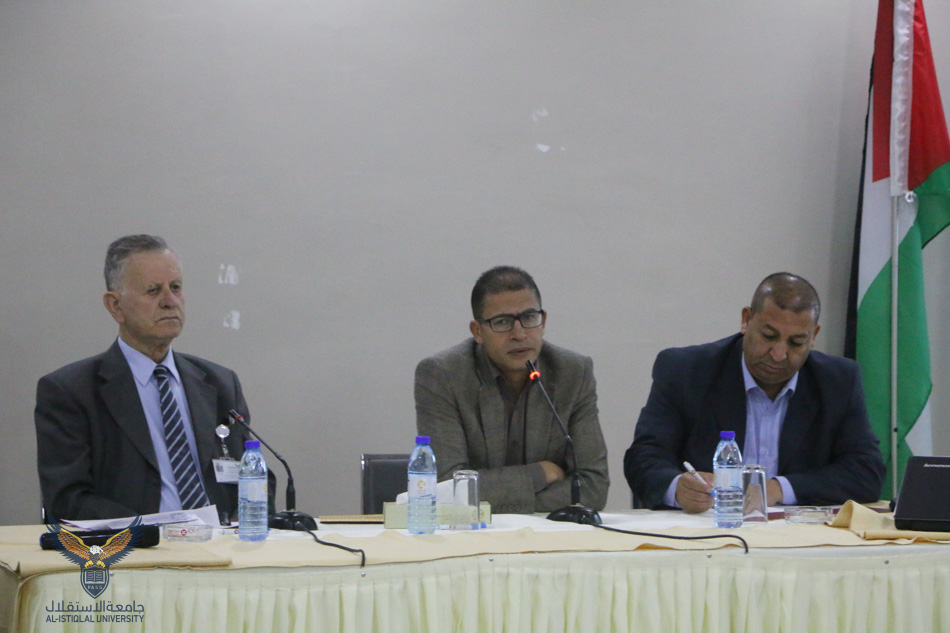 Prof Dr. Muaweya Ibrahim, the Vice President for Academic Affairs and as a representative for the President of the University, launched the course of "Security and Human Rights" which is organized by the Faculty of Law, Department of Legal Clinic at the University, in cooperation with the Independent Commission for Human Rights (the Board of Grievances) for the students of the third year, from the Department of Law and Police Sciences, which will continue for 3 days in the Tourist Village of Jericho and it will end by Tuesday .

Pro. Dr. Ibrahim expressed his happiness to participate in the opening session, thanking the Independent Commission for Human Rights, on behalf of the President, for its continuous cooperation and partnership, stressing the need for these kinds of courses especially in light of the difficult circumstances resulting from the occupation, wishing all success to the participants.

For his part, Dr. Nezam Salahat, the Dean of the Faculty of Law , welcomed the University’s official attendees and the Independent Commission for Human Rights, saying that this workshop is considered as a part of an annual activity targeting the students of the third year for providing them with the knowledge in governance and human rights to be implemented after their graduation in the different Palestinian security intuitions .

Moreover, Mr. Mousa Abu Duhaim, the Director of the Investigations and Complaints Department of the Independent Commission for Human Rights, thanked Al-Istiqlal University, represented by the President of its Board of Trustees and its President, for hosting the course, praising the permanent cooperation with the Faculty of Law and Legal Clinic.

Also, he praised the students of Al-Istiqlal University who joined the courses of the Independent Commission in the previous years, and its results which were implemented on the ground during their work in the different security institutions, pointing out that the date of the session comes under difficult conditions for the Commission and its members due to the violent attack over its representatives in the Gaza Strip by Hamas elements.

The training course aims to promote the human rights concepts among the law and police graduates at Al-Istiqlal University, reduce the gap between law enforcement, the maintenance of public order and the respect of human rights, besides gaining the sense of human rights approach and promoting the respect for public freedoms in the light of national legislation and international standards, as well as highlighting regulations of using force and firearms by members of the Palestinian security forces.

Finally, the course will last for three days and will include daily lectures and training sessions, with lecturers and representatives from Al-Istiqlal University, the Independent Commission for Human Rights, the Public Prosecution, the Military Prosecution Office as follows: Mr. Mousa Abu Duhaim, the Director of the Investigations and Complaints Department of the Independent Commission for Human Rights, Ms. Islam Al-Tameme, the Director of the Training, Awareness and Advocacy Department, Dr. Nezam Salahat, the Dean of the Faculty of Law, and Dr. Abd El Latif Rabayaa with Mr. Anas Bowatna in the presence of  Ms. Karamah Faraj, the Head of the Legal Clinic Department, Dr. Abdallah Mahmoud, the Head of Criminology and Law Department, and Dr. Fadi Alawna, the Chief of the Police Sciences and Law Department.