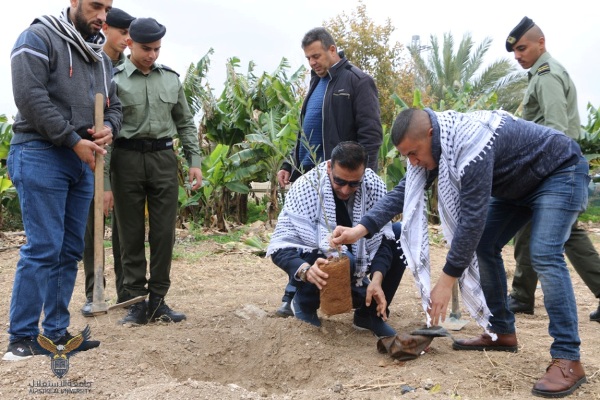 The University of Al-Istiqlal in joint efforts with the Directorate of Agriculture of Jericho, commemorated the 43rd anniversary of the Palestinian Land Day by planting dozens of olive seedlings in the Garden of the Grandparents' House in Jericho, on Sunday 31th of March 2019.

Mr. Shabaan Ayaat, the Director of the Center for Community Service and Continuing Education at Al-Istiqlal University, stressed that the planting of the olive seedlings in the Grandparents' House was organized in joint efforts with the Directorate of Agriculture Jericho, and comes at a great national occasion for our people, land and right which will not be forgotten.

In a related context, Mr. Ahmed Fares, the Director of the Directorate of the Ministry of Agriculture in the governorate of Jericho, mentioned that this event is an embodiment of the right of our people to have their freedom, hoping that the people will cling to their land and will end the occupation.

For his part, Mr. Tahseen Ishataya, the representative of the Director of Grandparent’s House Center, thanked Al- Istiqlal University for its efforts in involving the Center in the all national events and celebrations, saying that the planting of the olive tree today affirms the right of the Palestinian people in their land.

The Palestinian people commemorate the anniversary of the Land Day, which falls on the 30th of March of each year, and dates to the month of March 1976, after confiscating thousands of dunums, with private ownership, from the areas which belong to the Palestinians which resulted in a general strike and demonstrations from Galilee to Negev besides the clashes which resulted in injuries, the arresting of hundreds of people and six Palestinian martyrs: