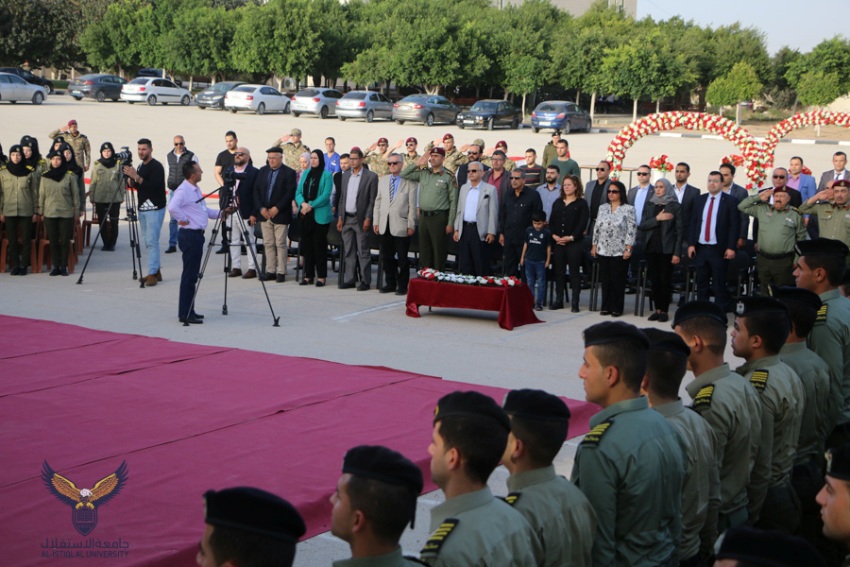 Under the patronage and the attendance of HE Maj. Gen. Tawfiq Tirawi, the Chairman of the Board of Trustees, Al-Istiqlal University organized an internal graduation ceremony for the seventh class of students “Al-Somod Class”, in the presence of Prof. Dr. Saleh Abu Osbaa, the President of the University, his deputies for Academic and Military affairs, the deans of the faculties, members of the cadre of the University and the officers of the Miilitary Department, in the theater and the University’s field, on Sunday evening 7th of April 2019.

HE Maj. Ge. Dr. Tirawi started his speech by recalling the positions of the siege over the Martyr Leader Yasser Arafat, his vision of the leader and how he can lead his work by wisdom to serve his country and people, reminding the graduating students that they would not have reached this day, the graduation, without the Palestinian leadership confidence of the martyrs and the symbols such as, Abu Ammar, Abu Jehad and our president Abu Mazen, mentioning the difficult stage which is facing the Palestinian leadership nowadays through the political and financial siege, pointing out that the sons of Al-Istiqlal University will break this siege, as every time, and that we are all ready to be martyrs on the land of beloved Palestine. Also, he said that Central Committee of Fatah Movement provided 16 martyrs of its leaders and thousands of its members.

Furthermore, HE Maj. Gen Dr. Tirawi praised the efforts of the Presidency of the University and its Academic, Military and Administrative staff, giving his particular thanks to the Department of Public Relations and Media for its efforts in producing a documentary film for the graduating students. In addition, he addressed the students to preserve the mission of the University by protecting the Palestinian people and our homeland, saying that "I donate my son Omar Tawfiq Tirawi, 6 years old, to be a student at Al-Istiqlal University".

In a related context, Prof. Dr. Abu Osbaa, the President of the University, stressed that the title of the seventh class of graduates of the Bachelor's degree, “Al-Somod Class”, is a sign of the difficult political stage of the Palestinian people and their leadership, and we need steadfastness in the face of internal and external conspiracies, addressing the graduating students that the Palestinian people are waiting for you to protect their future, sons and security.

Moreover, the student Mahdi Al-Muti gave a speech on the behalf of his colleagues which included the life of the graduating student during four years of academic and military studies, thanking the University’s leadership and its Chairmanship which is represented by Dr. Tawfiq Tirawi, Prof. Dr. Saleh Abu Osbaa and the Academic, Military and Administrative staff, for all their efforts to refine the students' character as officers able to serve the Palestinian security institution, stressing the stand behind the Palestinian leadership represented by its President Mahmoud Abbas.

During the graduation ceremony, a documentary film was presented by the Public Relations and Media Department about the student's military and academic life during the four years until the graduation day, and the national message that must be preserved while working for the Palestinian security institution.

Finally, many traditional shows were presented during the ceremony by Al-Istiqlal University Band for Traditional Arts on the national tunes and songs, with interaction of the students and the staff of the University.