For the First time, Al-Istiqlal University Implements a Simulation of Storming Building Entitled Dissipation of Darkness 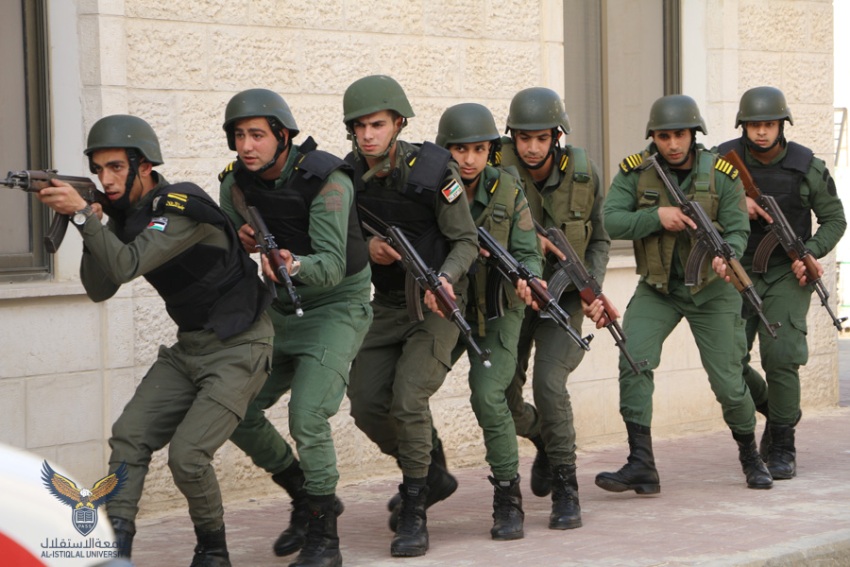 In accordance with the instructions of Col. Salman Taysir Abdullah, the Vice President for Military Affairs, the Military Department, in partnership with the Institute of Training and Development at the University and in cooperation with the National Security Forces in Jericho Governorate, implemented a hypothesis that simulates storming building entitled “Dissipation of Darkness” by the fourth-year bachelor's degree and second-year diploma students, in the campus, on Tuesday 9th of April 2019.

The hypothesis was attended by HE Maj. Gen. Tawfiq Tirawi, the Chairman of the Board of Trustees, Prof. Dr. Saleh Abu Osbaa, the President of the University, Col. Salman Taysir Abdullah, the Vice President for Military Affairs, Brig. Gen. Mohammed Taysir Abdullah, the Chief of the Air Police and a number of deans and military cadres.

HE Maj. Gen. Tirawi thanked all those who carry out this specific military exercise, wishing to continue in this way which enhances the capabilities of students before joining work in the Palestinian security institution.

In a related context, Col. Salman Taysir Abdullah said that such military exercises promote self-confidence of the graduating student and make him/her implement what he/she received in theory in practical and realistic terms. Also, he appreciated the National Security Forces, led by the Maj. Gen. Nidal Abu Dukhan, for their continuous cooperation with Al-Istiqlal University.

Moreover, the hypothesis included thwarting a planned terrorist cell located in a residential building. The students were able to break into this building, control terrorists and arrest them, showing their high military capability in dealing with the event at a high speed.

Finally, this military hypothesis comes within the framework of military exercises carried out during the academic year and complementing for the "Tactic 3" course, under the supervision of Col. Khaled Ateeq and Lieutenant Col. Tariq Shuqair, followed up by the team of trainers in the Military Department at the University and a number of National Security Forces officers, who provided the logistics of vehicles, equipment and weapons for the students.