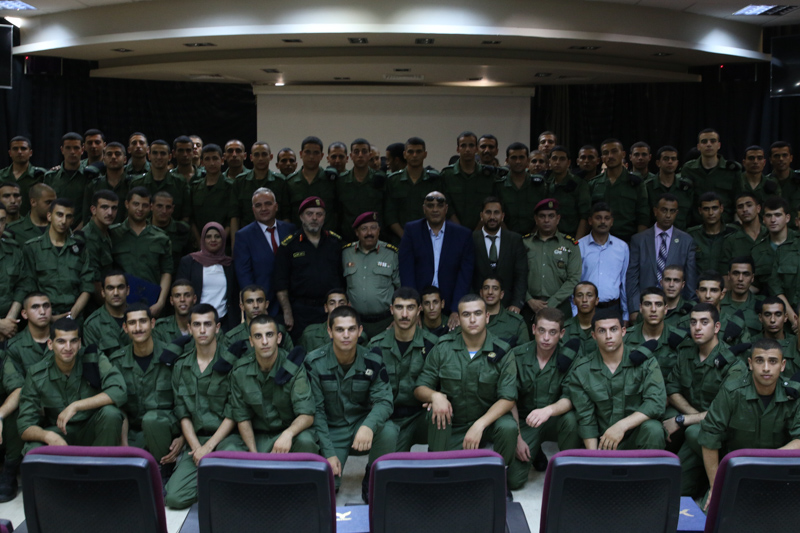 Al-Istiqlal University graduated the students who participated in "Al-Fajr Al Sadiq" military course and the celebration was represented by Col. Salman Tayser Abdallah, the Vice Presidents for Military Affairs, Dr. Rajaa Sweidan, the Vice President for Administrative and Financial affairs, in the presence of Col. Hatem Waked, the Commander of Tubas Region, Deputy Governor of Tubas Province, all the Directors of the Security Services in Tubas region, Col. Majdi Sardah, the Director of the Training and Development Institute, the crew of the British support team with the officers, trainers and supervisors of the course.

Col. Abdullah, on the behalf of the University President, thanked the leadership of Tubas region, expressing his pride of the students who participated in the course, explaining the goals of this course which qualify the students of the third year to practice all the military skills they were trained in the course.

For his part, Lt. Abdul Aziz Abu Qasim, the commander of the course, explained that the course involved both the study and practice of the military skills in terms of (topography, handling maps and compass, first aid and wounded evacuation, dealing with weapons, assets Addressing militarization, dealing with radios, analyzing orders, Field skills, searching people and vehicles and the intrusion principles).

Furthermore, the other security course which entitled “ The Security and Military Skills” concluded its work, in the presence of Prof. Dr.  Saleh Abu Osbaa, the President of the University, Col. Salman Tayser Abdallah, his deputy for military affairs, and the directors of the Palestinian General Intelligence and Preventive Security Services , which targeted the students of the third year of all specialties inside the campus of the University in Jericho.

Prof. Dr. Abu Osbaa praised the role of the Intelligence and Preventive Security Services through the course, stressing the importance of field training in developing the skills and the capabilities of the graduate student.

Moreover, Col. Salman Tayser Abdallah commended the officers and the trainers of the Intelligence and Preventive Security Services for their information to the students. Also, he thanked the officers of the University who supervised the success of the course, which comes as a start of the new strategy that adopts practical field training for all disciplines on the skills of security work, military and policing in conjunction with the security services.

In addition, Lt. Col. Tariq Shuqair, the course’s commander, said that the security course dealt with the skills of the field security work in the mechanisms of collecting information and the means to submit it to the competent authorities. During the course, the students received training in the special operations skills through the execution of the tasks entrusted to them.

At the conclusion of the two graduation ceremonies, shields were presented to the General Intelligence and Preventive Security Services and to the leadership of Tubas Region, as well as to the distribution of certificates of appreciation to the officers of the security services partners, supervisors and trainers from the University staff.

For more photos to The “Security Course” Please Visit: https://alistiqlal.edu.ps/page-2599-ar.html

For more photos to The “Military Course” Please Visit: https://alistiqlal.edu.ps/page-2598-ar.htm