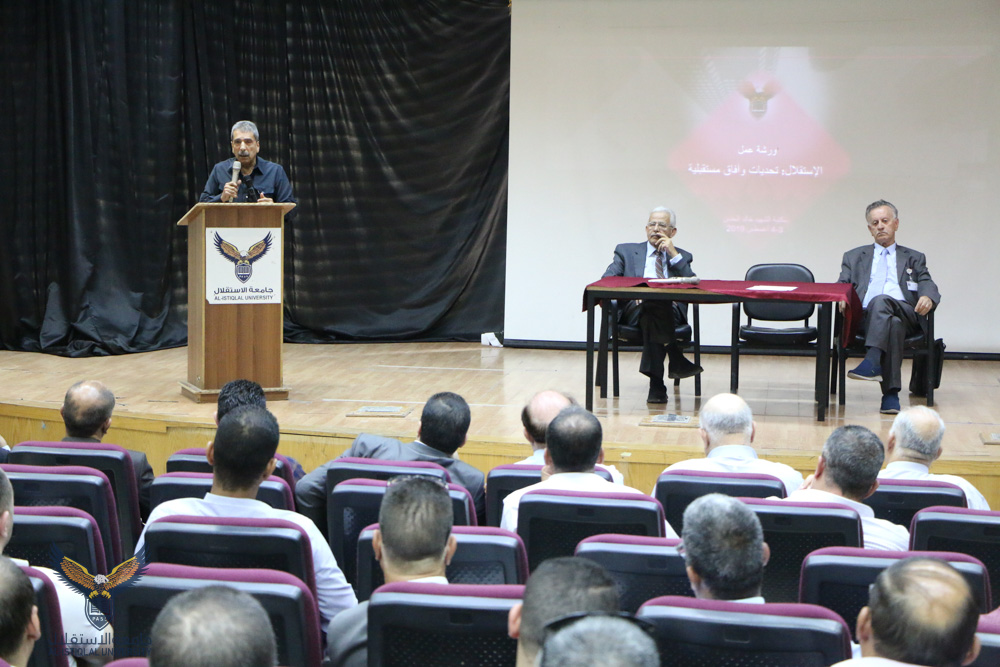 H.E. Maj. Gen. Tawfiq Tirawi, the President of the Board of Trustees at Al-Istiqlal University, inaugurated an internal workshop entitled "Challenges and future prospects", in the presence of Prof. Dr. Saleh Abu Osbaa and his deputies for Academic, Administrative and Financial Affairs at Sheikh Hazza bin Zayed Al Nahyan Theater on Saturday.

Furthermore, Maj. Gen. Tirawi greeted the attendees, stressing that all the workers, at the University, are partners in the success of this institution, which is part of the state institutions, saying "We want to avoid mistakes, pitfalls and problems which are existed in the other governmental institutions to improve the work process and maintain the quality standards”.

The Chairman of the Board of Trustees, at the University, pointed to the importance of discussing the contradiction between the academic and military cadres to reach an integrated process which ensures the efficiency of the graduates, mentioning the importance of the security science among the criteria of the study because the security was practiced as a hobby without any scientific ground, also the need of discussing the challenges that face students by integrating them into the various sports and recreational activities.

Maj. Gen. Tirawi concluded his speech by saying that the challenges of Al-Istiqlal University will not be solved without a real cooperation between the military and the administrative cadres and all those who serve in the University, praising the efforts of the various committees in the University in general and the Crisis Committee in particular.

Moreover, Prof. Dr. Abu Osbaa mentioned the importance of dealing seriously with the academic and military challenges and how to harmonize them to have qualified graduates to work in the Palestinian security institute through scientific methods and military scientific vision.

The workshop aims to strengthen the scientific system of the university, promotes the strategic objectives and plans, taking into account the academic and security dimensions for building the students.

Finally, the participants were divided into three groups, each containing (19) with distributing the topics on them. The topics included (The academic process and its relationship to the military training, How to reach a smart University and the cultural, intellectual and behavioral dimension of the University process).