HE Maj. Gen. Al-Tirawi participates in the interview committees to test the new students 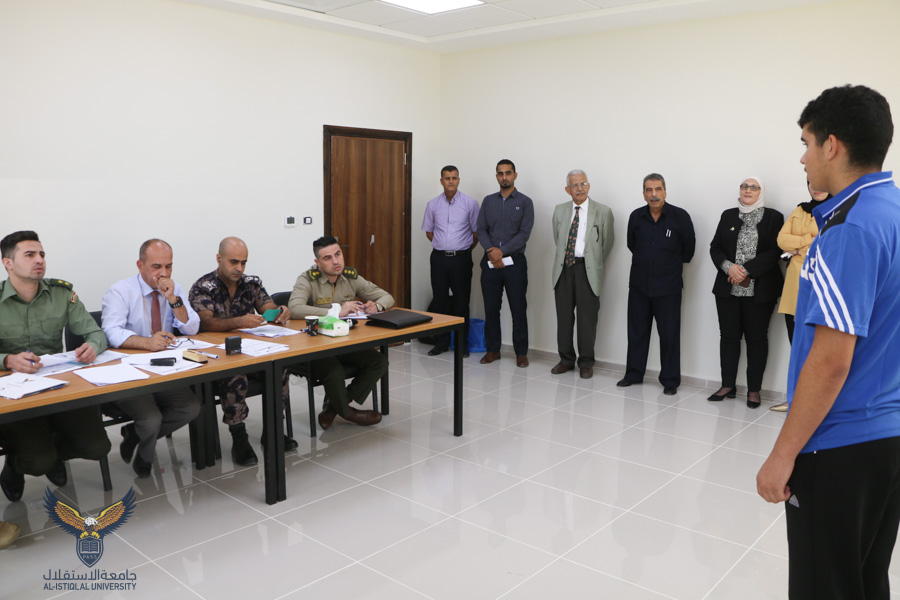 HE Maj. Gen. Dr. Tawfiq Al-Tirawi, the President of the Board of Trustees of Al-Istiqlal University, made a tour on the third day of interviewing the new students, accompanied by Prof. Dr. Saleh Abu Osbaa, the President of Al-Istiqlal University, his deputies for Military, Administrative and Financial Affairs, and the Deans of Admission, Registration and Student Affairs, in Jericho on Tuesday 20th of August 2019.

HE Maj. Gen. Al-Tirawi thanked the different committees for their efforts in conducting the various interviews, starting with the reception committee, the medical committee, at the headquarters of the Military Training Authority, to the personal interviews and the physical fitness examination inside the campus of the University, besides giving full detailed explanation, from the chairpersons, about the work mechanism and the system used in the admission of the new students.

Furthermore, Maj. Gen. Al-Tirawi met with some of the new students to measure the level of their national, historical and political culture, directing his message to the families of the students and the Ministry of Education to pay attention and focus on the structure of the national culture and knowledge, especially in the history of Palestine and its challenges.

The work of the interview committees is based on measuring the student's knowledge of the national issues, the history and the geography of Palestine, in addition to ascertaining the soundness of their pronunciation and their personal skills.

It is noteworthy to mention that today is the first to meet the male category of applicants for undergraduate and intermediate diploma programs, and the interview period will end on 29/8/2019, noting that the names of the accepted students will be announced on the University's official website.