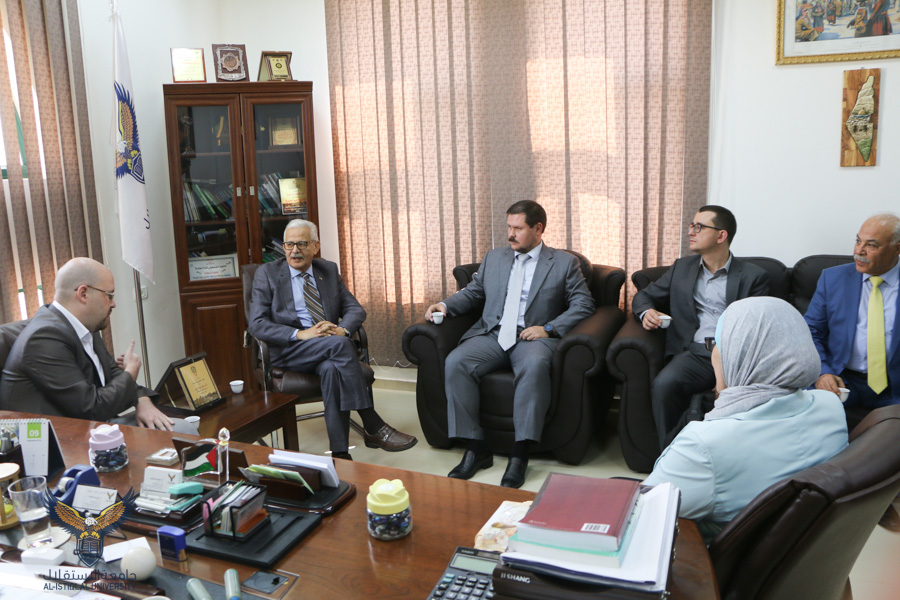 Prof. Dr. Saleh Abu Osbaa, the President of Al-Istiqlal University, and Dr. Rajaa Sweidan, his deputy for Administrative and Financial Affairs, received Mr. Anton Shmakov, the Deputy of the Russian Ambassador, and the delegation accompanying him, before the inauguration of the Russian language program inside the Russian Language Teaching Center at the campus of the University, on Saturday 7th of September 2019.

Prof. Dr. Abu Osbaa welcomed the deputy of the Russian ambassador and the delegation, stressing the University's keenness to continue this program because the Russian language is an ancient and advanced language, besides the consolidation of the Palestinian-Russian relations.

Furthermore, Prof. Dr. Abu Osbaa gave a letter of cooperation which involved some needs for the military part, noting the method which is used in the study process at Al-Istiqlal University and its current colleges, in addition to the others which will be opened next year.

For his part, Mr. Shmakov expressed his admiration of the program and its importance for the acquaintance and establishing political and economic cooperation, addressing the students that this program will be a chance for you to know about Russia and its history. Also, there will be cooperation at the political, economic and scientific levels with the Al-Istiqlal University.

This program aims to develop the students' knowledge about Russia and its language to develop their abilities and skills, mentioning that this program receives great attention from the Russian side and Al-Istiqlal University.

At the end of the meeting, the President of the University thanked the Russian Embassy and the Russian Center for this opportunity and cooperation, saying "We are appreciating the relations with great Russia and its civilization”.

It is noteworthy to mention that this program is continuing for the second consecutive year between Al-Istiqlal University and the Russian Center for Science and Culture.