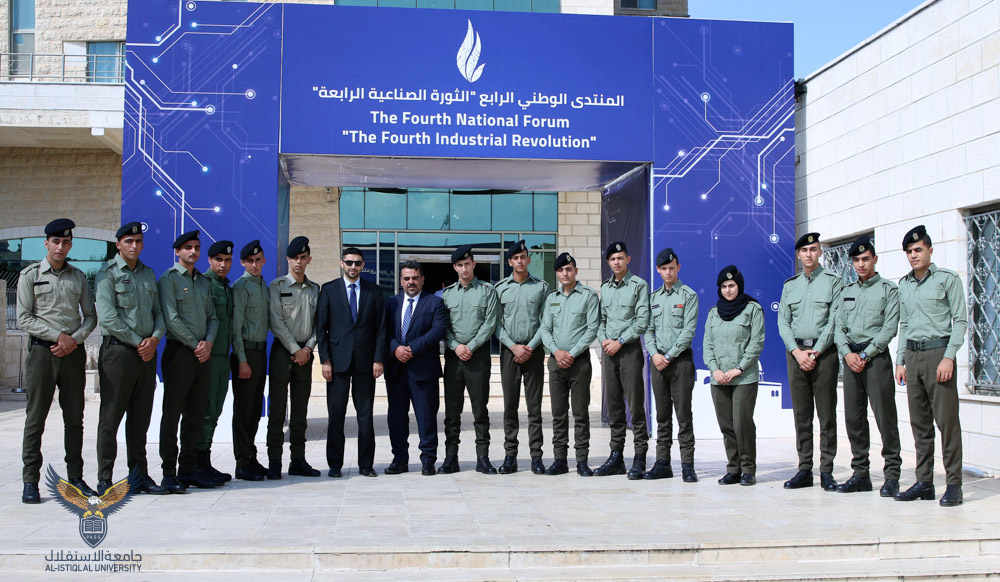 Al-Istiqlal University, represented by Prof. Dr. Saleh Abu Osbaa, the President of the University, accompanied by Dr. Maamoun Abu Helou, and Dr. Mohamed Roshdy, participated in the opening of the Fourth National Industrial Revolution Forum, which was organized by the Higher Council for Innovation and Excellence, in the presence of His Excellence President Mahmoud Abbas, with the participation of the various Universities and educational institutions, at the Red Crescent building in Ramallah, on Monday 9th of September 2019.

The President Mahmoud Abbas inaugurated the Fourth National Forum and toured the exhibition with reviewing the most important inventions and achievements of the creative youth, stressing the need to provide all possibilities to support them and convey their messages to the world.

Furthermore, the Palestinian President stressed that excellence and creativity are the most important ideas adopted by the Palestinian Authority and worked successfully, mentioning that: "We are in a new era and race the developments of it, which is very important to have a modern state in future, especially that we are a creative people with distinct and great history, and what we see today in the forum preaches that the future is for us and the state will be established by God willing”.

For his part, Dr. Dr. Maamoun Abu Helou stressed the importance of the participation in this forum, especially that it intersects with the future plan Al-Istiqlal University in establishing the Faculty of Information Technology and unique specialties, which meet the requirements of the Palestinian community, wishing the success for the conference, its organizers and its participants, and for the students of Al-Istiqlal University in the coming years.

This conference will be held for two days, with the slogan of "Now is the time to join" by the participation of the different start-up companies and the scientific researches which are considered as achievements for the Fourth Industrial Revolution.

The conference aims to contribute in preparing the stakeholders in Palestine to keep pace with the era of the (Fourth Industrial Revolution), exchange local, regional and international experiences for the purposes of future planning, opening the gates of partnership, increasing the local knowledge and awareness of the modern technological revolution and the impact of its implementations on the researches and the development of the public and higher education, in addition to achieving the United Nations Plan (2030) and its 17 objectives about the sustainable development, gender equality, empowerment of women and youth and their preparation for the labor market, and its impact on supporting and strengthening the national economy.

It is worth mentioning that Al-Istiqlal University and its presidency seek to participate in the local and international scientific conferences, to be benefit from its recommendations and outputs in order to develop work, and its impact on the scientific and practical outputs of University students.