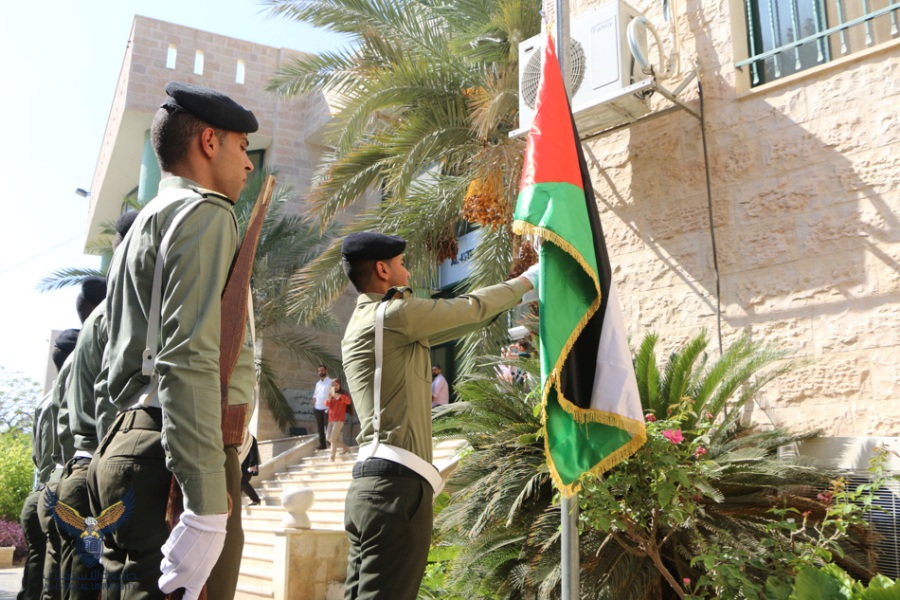 Al-Istiqlal University, through its Community Service Center, commemorated the Palestinian Flag Day, in the presence of Col. Salman Abdallah, the Deputy for Military Affairs, Deans of Colleges, Employees, Students, and a number of the local Community Institutions, on Sunday 29th of September 2019.

Col. Abdallah welcomed the attendees, noting the importance of celebrating the Palestinian Flag Day, which represents the moment of victory for the Palestinian people, four years ago, flying over the buildings of the United Nations.

Furthermore, he stressed the importance of the Palestinian Flag which constitutes the meaning of sovereignty and the symbol of the Just Palestinian Cause, which resulted martyrs in defense of this Flag, adding “ We will fight and strive to keep the Palestinian Flag raised, despite of all the challenges of the occupation and we will not accept to be touched by anyone”.

Moreover, Col. Abdallah thanked the Community Service Center of the University, represented by its Director Dr. Hazar Ismail, the Center's staff and all those who contributed in reviving this event for their efforts. The event included a short documentary film prepared by the staff of the Media and Public Relations Department at the University, and a Photo Exhibition containing (40) paintings of the Palestinian Flag over the historical places in the holy land.

For her Part, the student Aysel Safi recited a poem about the Flag, then the attendees went to raise it with the participation of students.

It is noteworthy to mention that the General Assembly of the United Nations, agreed to raise the flag of Palestine at its headquarters in New York, on 11th September 2015, and 119 countries voted for this resolution. The Palestinian Flag embodies the identity of the Just Palestinian cause which results hundreds of thousands of martyrs, wounded and prisoners, starting from the Al-Buraq Revolution in 1929 until now.