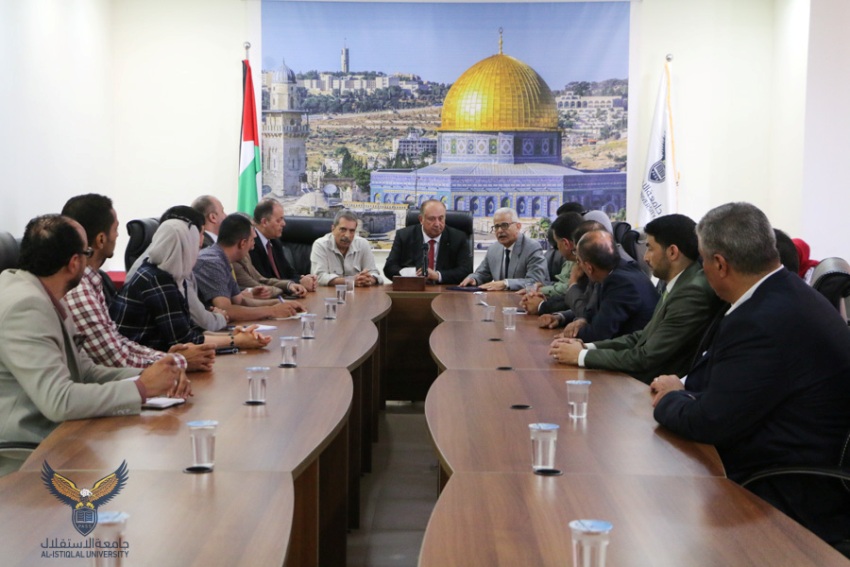 HE Maj. Gen. Dr. Tirawi welcomed the Minister and the delegation accompanied him, providing an overview of the University, its specializations and the system, stressing that the Palestinian people have defeated the occupation, Nakba and the setback by the science and revolution, and that the Palestinians are one of the most educated people, pointing out that the relationship between the University and the Ministry of High Education and Scientific Research has a Significant importance, because science needs security and the homeland is based on security, praising the efforts of Minister and considering him as a scientific, national and high cultural stature.

Furthermore, Prof. Dr. Abu Osbaa, the President of Al-Istiqlal University, pointed out the importance of this meeting, stressing that the University is ready to meet any need of the Ministry, giving a brief on the mechanism of the student admission to the University, and the nature of the Academic and Military program during the year, also he stressed the importance of the Ministry and its efforts in promoting the high education and the scientific research in Palestine.

For his part, Prof. Dr. Moyes, the Minister of High Education and Scientific Research, expressed his love and the historical relationship with HE Maj. Gen. Dr. Tirawi, mentioning his pride of the University as a Palestinian national edifice specialized and distinguished in its Academic programs, and graduates.

Moreover, Prof. Dr. Moyes gave the accreditation of the Ministry to the (GIS) Security Program and the Bachelor of Tourism Security and Archeology Program, stressing the importance of the programs in serving the Palestinian education process, wishing the University and its students the permanent success and progress.

Finally, the visit included a short introductory film about the University and its achievements with a field tour for the Minister to get acquainted with the University facilities.