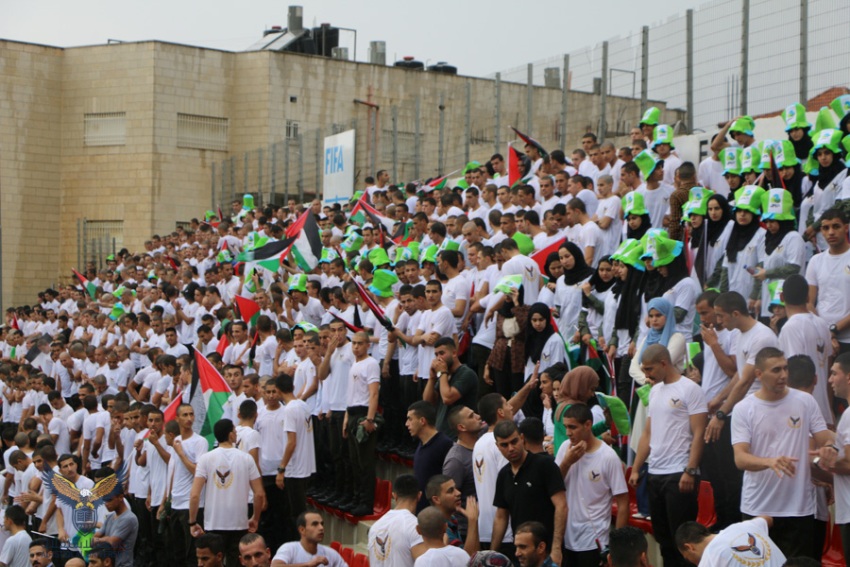 Under the guidance of HE Maj. Gen. Dr. Tawfiq Al-Tirawi, the President of the Board of Trustees of Al-Istiqlal University, hundreds of students and officers participated in supporting the Palestinian and Saudi football teams match on the ground of “Faisal Husseini” Stadium in Ram, North of the occupied Jerusalem, On Tuesday evening 15th of October 2019.

The atmosphere of enthusiasm prevailed on the stadiums besides the great Palestinian national presence, to support the Palestinian national team and its Saudi Arabian counterpart, who attended for the first time to Palestine. The match presented the playoffs of the Asian double qualifiers, in the fourth round of the Group D qualifiers for the World Cup 2022 and Asian Cup 2023, and ended in a goalless draw.

Furthermore, Al-Istiqlal University represented about 800 students and 50 officers, forming a beautiful artistic painting, chanting the national words and songs amid the enthusiastic encouragement of the Palestinian team, who controlled the match during the both parts, and played with fraternal spirit with the Saudi players.

Moreover, Saudi Arabia team is the sixth Asian team to face its Palestinian counterpart at the stadium of “Faisal Husseini", after the presence of Jordan, Afghanistan, Iraq, the United Arab Emirates and Uzbekistan.

It is noteworthy to mention that the Saudi team players, Mr. Yasser Al-Meshal, the President of the Saudi Football Federation, and the official delegation accompanying him, received a warm reception from the Palestinian officials and popular, and hosted by President Mahmoud Abbas, in Ramallah, in the presence of Maj. Gen. Jibril Rajoub, the President of the Palestinian Football Federation. Also they visited the occupied Jerusalem, and prayed in Al-Aqsa Mosque.