Al-Istiqlal University Participates in the Information Day (Erasmus +) in Palestine 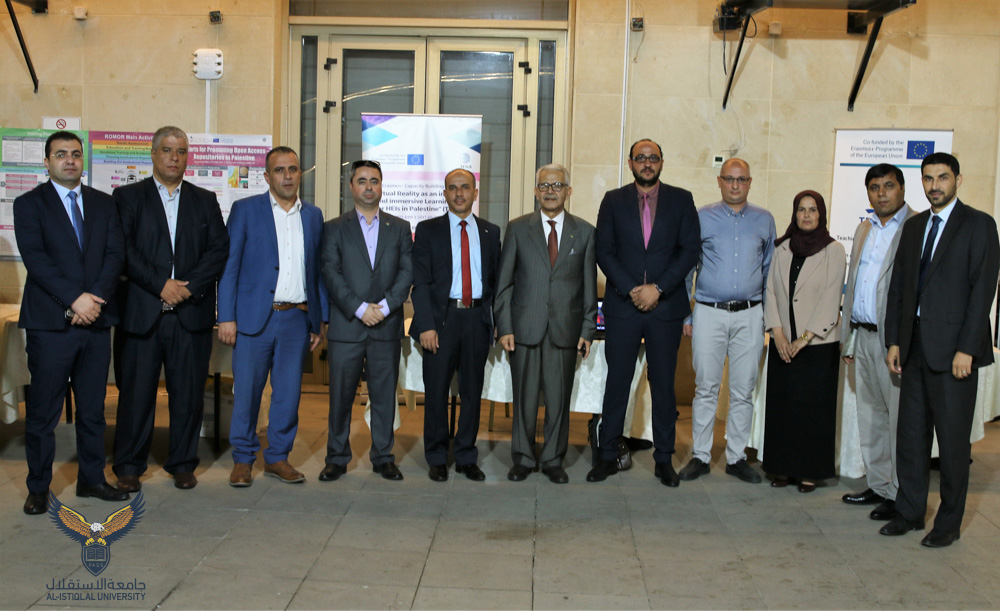 Al-Istiqlal University, represented by its president Prof. Dr. Saleh Abu Osbaa and the deans of the faculties, participated in the events of the Information Day (Erasmus +)  which was implemented by the Palestinian-European Cooperation Mission of Higher Education, and was organized by the National Office of (Erasmus +), which is headed by Dr. Nidal Al-Jayousi. The event was held under the auspices and the presence of Dr. Mohammed Ishtaya, the Prime Minister of Palestine, Prof. Dr. Mahmoud Abu Moyis, the Minister of Higher Education and Scientific Research and Mr. Thomas Nicolas, the EU Representative, with the participation of the different Palestinian Universities and educational institutions, at the Grand Park Hotel, in Ramallah, on Wednesday 16th of October 2019.

Dr. Ishtaya, the Palestinian Prime Minister, inaugurated the events of the Information Day (+ Erasmus), thanking the European Union for providing funds to promote the scientific research program (Erasmus) and supporting the Universities and the institutions of the country, with greeting the representatives of Turkey, noting the importance of the spiritual partnership between science and education, and the development of the scientific method to contribute in promoting the understanding skills instead of the memorization to build the minds properly, mentioning that "The Palestinian people are under the control of the occupation, and they must go forward, because this occupation wants the people to go back, so the Palestinians must protect their Progress in the field of science to defeat it."

Furthermore, he stressed that the separation between the Ministry of Education and the Ministry of Higher Education and Scientific Research came  to make the outputs of the education properly qualified as inputs for higher education and scientific research, aiming to create a balanced development in the various sectors, urging the presidents of the Universities to review the parallel education system which negatively influenced the educational process, calling the private sector to provide the proper support for the development of the Palestinian scientific aspect.

For his part, Mr. Fayez Abdul Hafeez, the project coordinator of Al-Istiqlal University, said that this project aims to build the capacity and implement the virtual reality technology in the Palestinian educational institutions by developing three different fields in the forensic laboratory, geography and geology, and the security program (GIS), where the city of Jericho was chosen for the study as a city of great historical character.

Moreover, the Presidents of the Palestinian Universities were honored for their efforts in developing and building the capacities, in which this program aims to strengthen the European cooperation and the international networks in the field of higher education and scientific research through the support of high-level European Masters and PhDs, to give the chance for all the students in the world for continuing their studies and developing their scientific and academic abilities.

It is noteworthy to mention that Al-Istiqlal University, in partnership with three European Universities and four Palestinian Universities, is working to build and promote the capacity of academic and technical staff on how to create a scenario, also teaching them how to integrate the virtual reality technology in the educational process, after that being in the second stage of receiving the scenario by the programmers and implementing it in the last phase. These activities will start at the beginning of the next year, to have a pilot class in participations with the Universities.