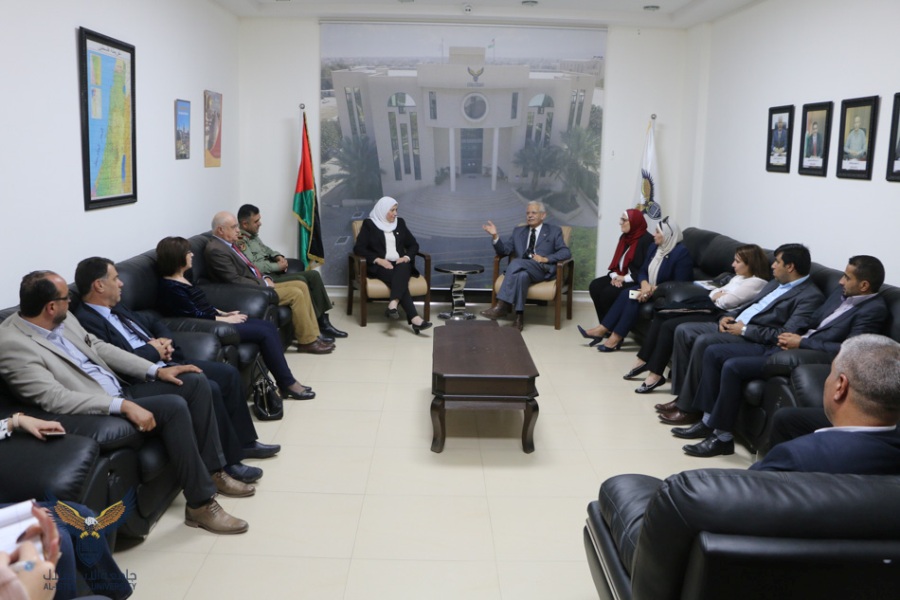 Prof. Dr. Saleh Abu Osbaa, the President of Al-Istiqlal University, received Dr. Amal Hamad, the Palestinian Minister of Women's Affairs, in the presence of Prof. Dr. Hamdan Taha, his deputy for Academic Affairs, Col. Salman Abdallah, his deputy for Military Affairs, Dr. Rajaa Sweidan, his deputy for Administrative and Financial Affairs, and the deans of the colleges, in the campus of the University, on Tuesday 29th of October 2019.

The reception was organized by a female officers from the Military Department of the University, besides conducting a meeting with the students and staff at the Sheikh Hazza bin Zayed Al Nahyan Theater, and organizing a tour inside the campus to get acquainted with its buildings and colleges.

Furthermore, Prof. Dr. Abu Osbaa stressed that Al-Istiqlal University is interested in promoting the presence of women and engaging them more fully in the leadership positions, besides expressing his happiness at this important meeting, stressing the need to hold other meetings to strengthen Palestinian women to empower them in society.

For her part, Dr. Hamad expressed her love and happiness to visit Al-Istiqlal University, praising the efforts made, and also thanked HE Maj. Gen. Dr. Tawfiq Tirawi, the President of the Board of Trustees, for the idea and the national message of Al-Istiqlal University, mentioning the efforts of all the staff and workers in building and developing this national edifice of Palestine.

It is worth mentioning that the Palestinian National Women's Day was adopted by the Council of Ministers at its (13th) session, under the chairmanship of the Prime Minister Mohammad Ishtayyeh, which was held on 17th of July 2019, to empower the Palestinian women and strengthen their role, at the national level.