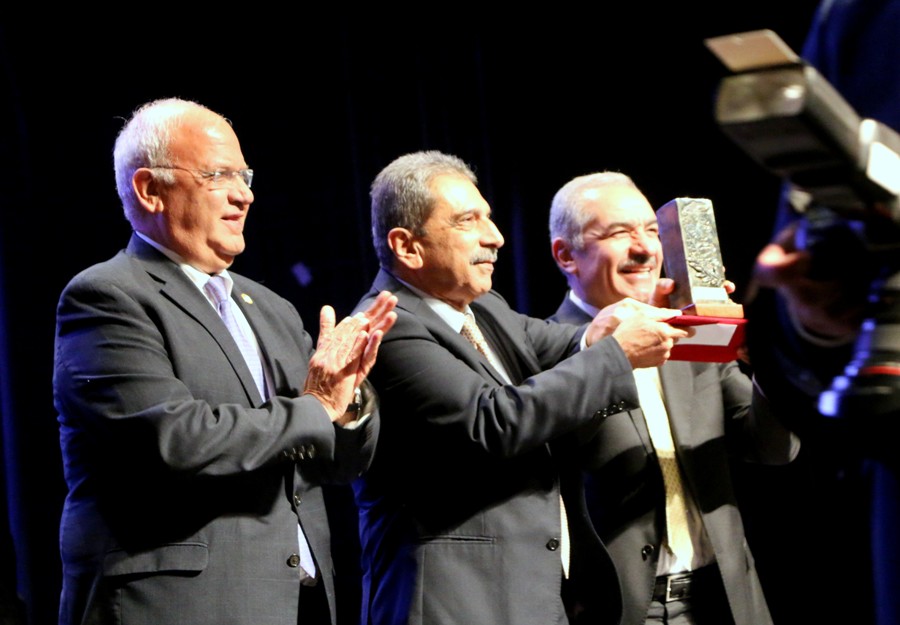 HE Maj. Gen. Dr. Tawfiq Al-Tirawi, the Chairman of the Board of Trustees of Al-Istiqlal University, donated the financial value of the “Yasser Arafat Achievement Award 2019 '' to Al-Muttalah Hospital, on behalf of the Board of Trustees, during the ceremony of commemorating the fifteenth anniversary of the martyrdom of the founding leader Yasser Arafat, which was held by the Foundation of Martyr Yasser Arafat, in the presence of Dr. Mohammed Shtayyeh, the Palestinian Prime Minister, members of the Fatah Central Committee and the PLO Executive Committee, with Official and International representation, besides Dr. Saleh Abu Osbaa, the President of Al-Istiqlal the University, his Deputies, the Directors and the Deans of faculties, at the Ramallah Cultural Palace yesterday.

Furthermore, Maj. Gen. Al-Tirawi, in his speech, talked about the spirit of challenge which was planted by the President Yasser Arafat inside the hearts of the Palestinians, in addition to the story of establishing Al-Istiqlal University and how President Arafat refused to call it his name and replaced it with the name of “Palestine”.

And, he said: I told President Arafat about the idea of Al-Istiqlal University, which was started as Academy, and how President Arafat asked me to justify its establishment, I did so, calling its name “Yasser Arafat Security Academy”, he signed and approved it, with granting special land, at that time, but he put the name of “Palestine” instead of his name.

Moreover, Maj. Gen. Al-Tirawi stressed:  We did not have a dinar or a dollar, at that time, but we are the students of "Abu Ammar", "Abu Jihad", "Abu Iyad", "Abu Sabri", "Abu Mazen", and all of the great leaders who taught us how to deal with challenges. This University was built to serve the children of the martyrs, prisoners, orphans, the poor and the needy of the Palestinian people, and it will exist in every Palestinian house, mentioning his pride of its Educational, Academic and Administrative cadres and all of its staff, including his colleagues on the Board of Trustees.

In the end, Maj. Gen. Al-Tirawi said: the occupation and division will be defeated... If the Israeli leaders believe that “Ma'aleh Adumim” and “Beit Eil” are Israeli areas, then Haifa, Jaffa, and Acre are Palestinian and will remain Palestinian, announcing that the financial value of the prize will go to Al-Muttalah Hospital in Jerusalem.

In his turn, Dr. Shtayyeh affirmed that the "Deal of the Century" had fallen and failed, calling the Arabs and Europeans to be prepared on the bases of the international law and legitimacy, and conducting an international conference after the failure of bilateral negotiations to end the occupation. Also, he said that the fulfillment of the Martyr Yasser Arafat is a part of the commitment to the national cause and that Arafat's "candle" will continue to illuminate the road to Jerusalem and return.

For his part, Dr. Nasser Al-Kidwa, the Chairman of the Yasser Arafat Foundation, pointed out, in his speech, to broad national dialogues and consensus to face the difficult situation which resulted many problems in the structure, the political strategy and in the building of man, expressing the readiness of the foundation to support in the different social fields.

Dr. Nabil Kassis, the Chairman of the Yasser Arafat Committee, announced that Al-Istiqlal University won the award, at its thirteenth session, in partnership with “RIWAQ”, the Palestinian Popular Architecture Center, during the ceremony of commemorating the fifteenth anniversary of the martyrdom of the founding leader Yasser Arafat.

Dr. Shtayyeh, the Prime Minister of Palestine, Dr. Al-Kidwa, the Chairman of the Yasser Arafat Foundation and Dr. Saeb Erekat, the Secretary-General of the Executive Committee of the PLO, presented the award to Maj. Gen. Al-Tirawi, the President of the Board of Trustees of Al-Istiqlal University and Dr. Khaldoun Bishara, the Executive Director of RIWAQ Center.

Finally, Yasser Arafat Foundation released a short documentary entitled “Crimes”, about Israeli crimes which were perpetrated against the Palestinian people and their legitimate rights, besides a performance entitled " How Much You Are Alone "  was conducted by the Artists Mr. Amer Halhal and Mr. Habeb Shihada who were inspired by the Palestinian poetry of Mahmoud Darwish and Ahmed Dahbour.

It is noteworthy to mention that “Yasser Arafat Achievement Award” is an annual prize which is given by Yasser Arafat Foundation annually, since its founding in 2007. The award includes a certificate and financial value of $ 25,000.