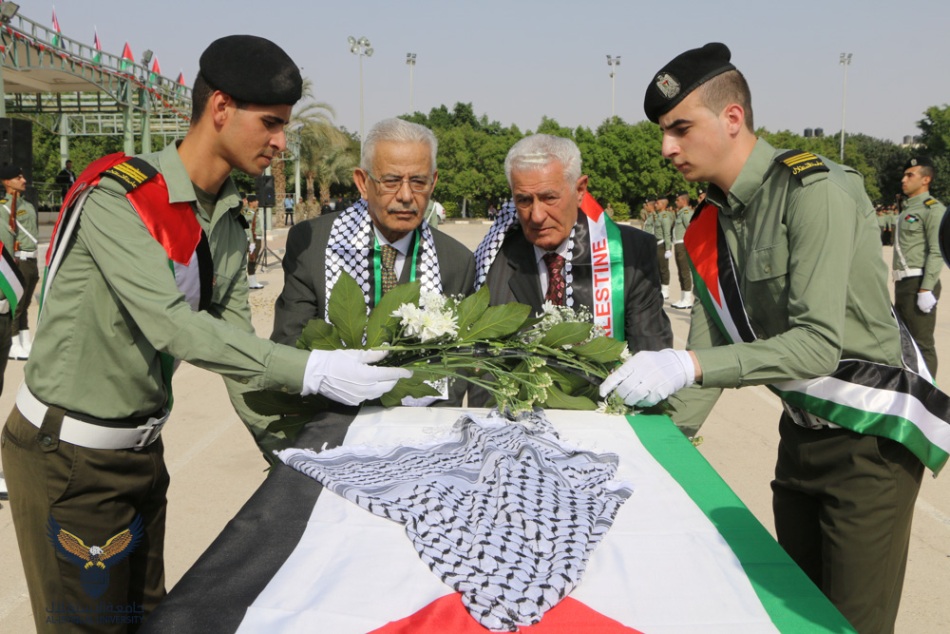 Al-Istiqlal University commemorated the fifteenth anniversary of the Martyr Leader Yasser Arafat "Abu Ammar", in the presence of Prof. Dr. Saleh Abu Osbaa, the President of the University, Mr. Abbas Zaki, a member of the Fatah Central Committee, Ms. Yusra Sweiti, the Deputy Governor of Jericho and the Valley, besides the Local Community Institutions in Jericho, Prof. Dr. Hamdan Taha, the deputy for Academic Affairs, Col. Salman Abdallah, the Deputy for Military Affairs, Dr. Raja Sweidan, the Deputy for Administrative and Financial Affairs, the Deans of Faculties, Staff and the Students, inside the campus of the University, on Wednesday 13th of November 2019.

Prof. Dr. Abu Osbaa welcomed the attendees, saying “Yasser Arafat is the inspiration and the founder of revolution and this event represents the hope for all the Palestinians, stressing that the student of the University are lions following the ideas and the history of “Abu Ammar” to provide the protection and liberation for our homeland, from the river to the sea and the capital Jerusalem, pointing out that Martyr Arafat was the leader, the national father, the founder of the revolution and the one who announced the Pillars of the Palestinian State”.

Furthermore, Mr. Zaki said that Martyr Leader Yasser Arafat raised the flag of victory, and will remain alive in the hearts of all the Palestinians. Also, he was the man who charted the history of Palestine through his personality, and was the leader of this revolution journey outside and inside Palestine against the Zionist occupation. Also, he is the inspiration of the Palestinian revolution until the return and the self-determination. And, he praised Al-Istiqlal University and its efforts in building the Palestinian future, where the right man is placed in the right place.

During the event, the students of Al-Istiqlal University presented national and military performances and activities, with poetry about the martyrdom of Yasser Arafat.

It is noteworthy to mention that Al-Istiqlal University won the “Yasser Arafat Award for Achievement for 2019”, which was granted by the Yasser Arafat Foundation, in its annual ceremony on the anniversary of the Martyrdom of President Arafat, and the University donated the Financial value of the award to Al-Mutalla Hospital in Jerusalem.