HE Maj. Gen. Al-Tirawi Receives the Chief of the General Personnel Bureau 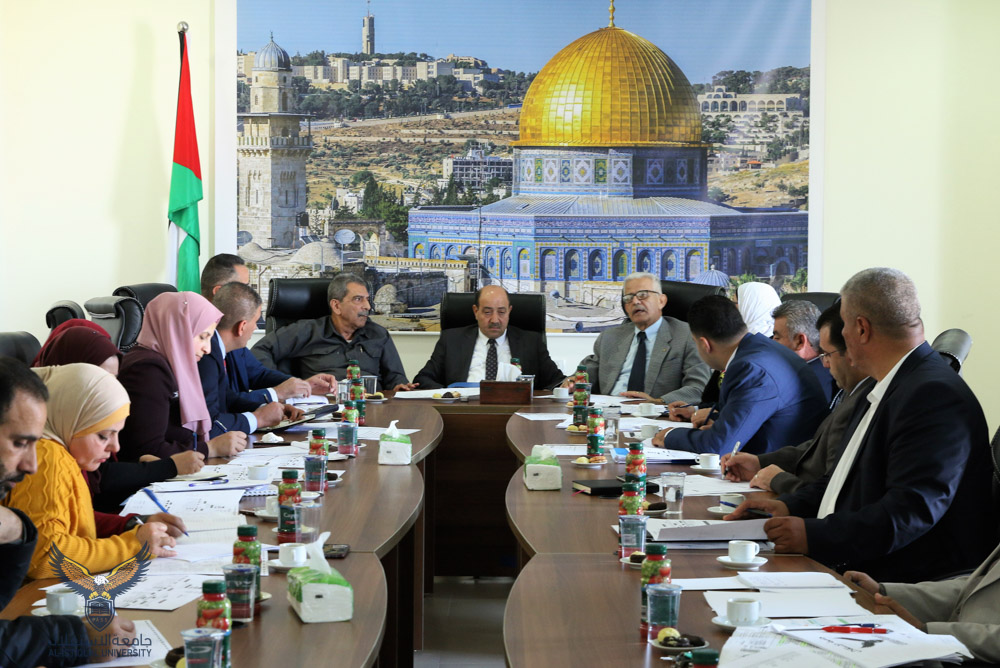 HE Maj. Gen. Tawfiq Al-Tirawi, the President of the Board of Trustees of Al-Istiqlal University, received the Minister Mousa Abu Zaid, the Chief of the General Personnel Bureau, and the delegation accompanied him, in the presence of Prof. Dr. Saleh Abu Osba, the President of the University, Prof. Dr. Hamdan Taha, the deputy for Academic Affairs, Dr. Rajaa Sweidan, the deputy for Administrative and Financial Affairs, the Deans of Faculties and the Human Resources Management, inside the campus, on Tuesday 19th of November 2019.

Maj. Gen. Al- Tirawi welcomed the Minister Abu Zaid and the delegation accompanied him, praising their efforts, achievements and the role of Palestinian Personnel Bureau in the institutionalization of the Ministries and the National Organizations, besides promoting them by the qualified cadres and raising the efficiency of the workers.

Furthermore, he clarified the rules, regulations and laws, which are followed, in dealing with the students and the University’s’ staff, where the structure of the University is developed and modified, based on the requirements of the University's long-term strategic plan.

Moreover, Prof. Dr. Abu Osba presented a summary of the new specializations and programs that will be implemented, in addition to its vision, and the efforts of the Deans and Colleges Council in developing and adapting the work according to the planned vision and objectives.

For his part, the Minister Abu Zaid expressed his pride and the historical relationship between the Palestinian Personnel Bureau and the University of Al-Istiqlal, saying that this visit will be within the framework of the partnership between both institutions, where the existence of Al-Istiqlal University is very important to our homeland and the security of the citizen.

Mr. Abu Zaid added “A strategic plan should be developed with the Palestinian Personnel Bureau, pointing out the possibility of holding training courses for managers of the University in the specialization of management, to develop the work of the University, especially in the separation and the non-overlap between the academic, administrative and military work.

Dr. Sweidan pointed out the purpose of this visit, which is developing and promoting the Department of the Human Resources Department at the University, and the laws relating to the academic employee, as well as discussion on a proposal for a scholarship agreement with the Palestinian Personnel Bureau, due to the strategic plan and the future directions, with determining and clearing the old structure and presenting the new structure proposal to the Personnel Bureau.

It is noteworthy to mention that the Presidency of the University, by recommendations of HE Maj. Gen. Dr. Al- Tirawi the Chairman of the Board of Trustees, conducts periodic meetings to promote and develop the cooperation and the permanent partnership with the Palestinian Organizations to meet the needs of the Palestinian Security Institution.