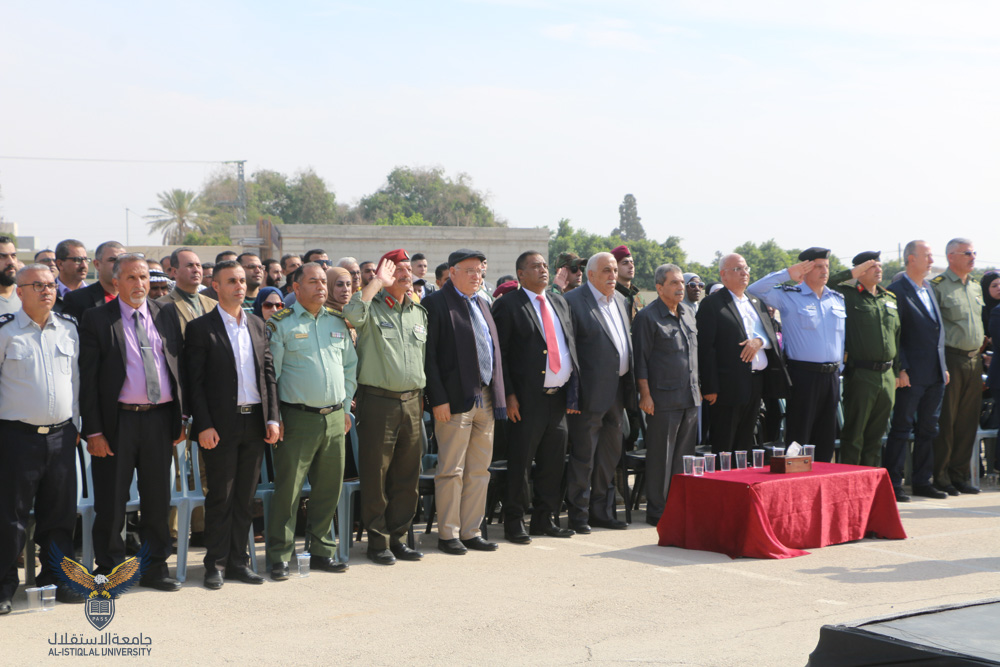 Under the patronage of President Mahmoud Abbas, in the presence of HE Maj. Gen. Tawfiq Al-Tirawi, the President of the Board of Trustees of the University, Dr. Saeb Erekat, the Secretary- General of the PLO Executive Committee, Mr. Jehad Abu Asal, the Governor of Jericho, Mr. Salem Al-Ghrof, the Mayor of Jericho, besides the Chairman of the Chamber of Commerce, the Directors of the Palestinian Security Services, the Civil and Educational Institutions, the Members of the Local Council in Jericho, and the Women's and Trade Unions. A celebration was held in Jericho on the occasion of receiving the Yasser Arafat Award for Achievement 2019, at the University's headquarters, on Monday 25th of November 2019.

Maj. Gen. Al-Tirawi welcomed the attendees, presenting several messages in his speech, which included that President Mahmoud Abbas has completed the footsteps of Martyr leader Yasser Arafat in the construction and the full sponsor of Al-Istiqlal University. Also, he said “I don’t need any position or any building and street bear my name, I just need a place of two meters by a meter, and the soil of my homeland Palestine to cover me”, pointing out to the great responsibility over Fatah movement in the province of Jericho and the Valley.

For his part, Dr. Erekat praised the efforts of the Chairman of the Board of Trustees of Al-Istiqlal University, and the staff who achieved many positive results on the level of Palestine, mentioning that the reason of this success is that the University is based on the patriotism, objectivity, credibility and love of the homeland and its people, saying: "We are proud of this great educational edifice and its founder", thanking Dr. Nasser Al-Qidwa, the Chairman of the Yasser Arafat Foundation, and the committee that chose the winners objectively, transparently and honestly. It is worth mentioning that Dr. Erekat is a member of the Board of Trustees of Al-Istiqlal University.

Moreover, Mr. Abu Asal expressed his pride in receiving Yasser Arafat Award for Achievement 2019, mentioning that Al-Istiqlal University is an academic and national institution which deserves this victory because it has been able to prove itself at all levels, thanking Al-Qidwa, stressing that this award is Invaluable, describing the University of Al-Istiqlal as a local production in creativity and excellence in training, giving and belonging.

During the event, Al- Istiqlal University band for Folklore presented many traditional shows and performances, besides honoring Al-Istiqlal University by all the security, economic, educational, cultural, civil organizations and unions in the province of Jericho.