In the presence of Dr. Saeb Erekat, Al-Istiqlal University organizes a political seminar on the recent US settlement decision 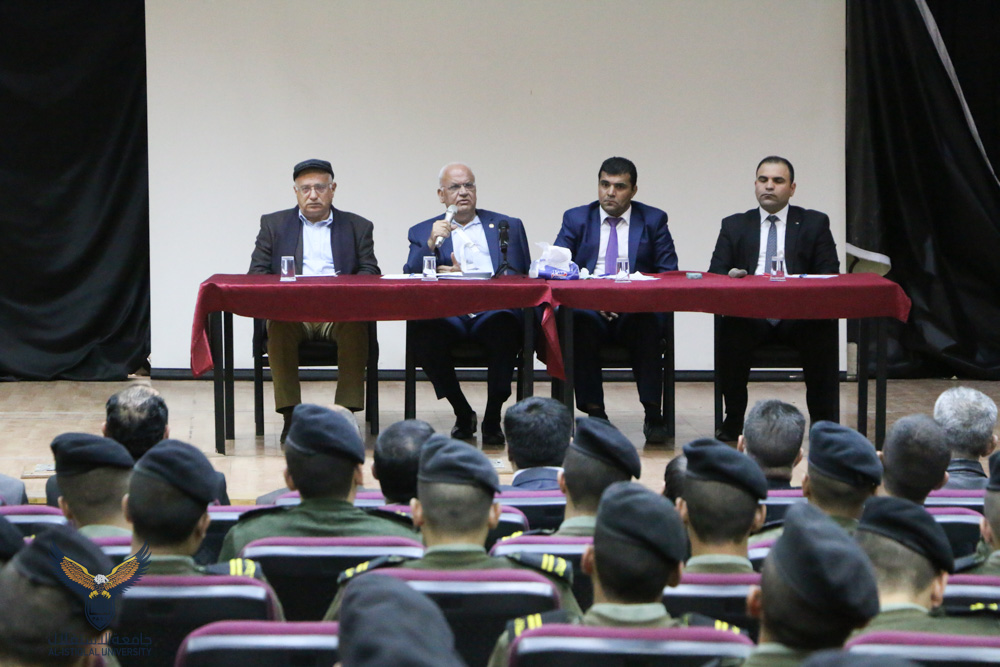 The Legal Clinic, which is affiliated with the College of Law, at Al-Istiqlal University organized a political seminar on the recent US decision that legitimated the Israeli settlements in Palestine, entitled "The Political and Legal Implications of the American Decision on the Legitimacy of Settlements”, in the presence of Dr. Saeb Erekat, the Secretary of the Executive Committee of the PLO, Prof. Dr. Hamdan Taha, the Academic Deputy of Al-Istiqlal University, the Deans of Faculties, the Department of Legal Clinic, lecturers from the College of Law and a number of students from the various specializations, at Sheikh Hazza Bin Zayed Al Nahyan Theater, on Monday 2ed of December 2019.

At the beginning of the seminar, Prof. Dr. Taha welcomed Dr. Erekat and the attendees, speaking about the position of the American administration regarding the settlement decision, and the consequences of this decision, stressing that the legitimacy of settlement is a violation of the right of the Palestinian people and international law.

Furthermore, Dr. Erekat pointed that the American administration tried for three years to destroy the UNRWA, and the State of Palestine, which defends Palestinian rights and dignity, headed by President Mahmoud Abbas, so the vote was 170 votes in favor of extending the agency's mandate, in exchange for opposing America and Israel.

Moreover, he added that relying on the international legitimacy is not a position of weakness but rather a position of strength, citing the results of the vote in favor of "UNRWA" despite the rejection of the United States of America. Also, he said: "Our peace will not exist by a price, but it will exist by achieving the national demands and constants, the Palestinian national project, and the careful understanding of all the actions to avoid the worst.”.

Dr. Islam Al-Biari, a lecturer at the College of Law, talked about the starting date of the settlement project in 1967, and the need to go to international courts and organizations.

Finally, Dr. Mohammed Ishtayeh, a lecturer at the Faculty of Law, explained the dangers of the Israeli settlements according to the international law, confirming that it is the expulsion of Palestinians, the confiscation of lands, the building of settlements, the housing of Israelis in the Palestinian areas, and the creation of a demographic situation which affects the current and future Palestinian presence.

It is noteworthy to mention that Al-Istiqlal University regularly organizes political seminars, especially on the Palestinian issue and the repercussions of the American decisions to enhance the students' political knowledge and culture.