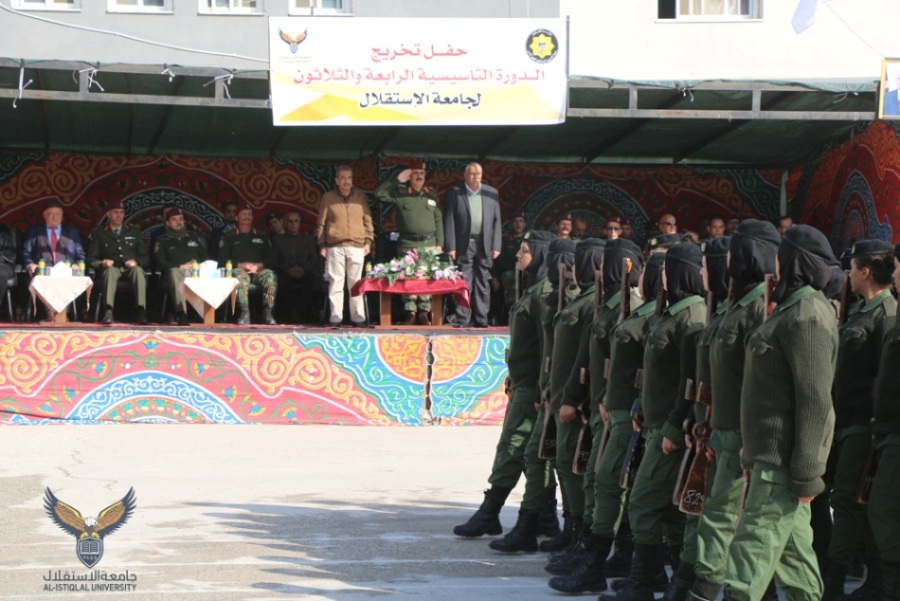 Al-Istiqlal University in partnership with the Military Training Authority had graduated the new students of the 34th Closed Military Course for the academic year 2019-2020, which numbered about 453 students within the undergraduate and intermediate diploma programs, in the presence of HE Maj. Gen Dr. Tawfiq Al- Tirawi, a member of the Central Committee of Fatah movement and the Chairman of the Board of Trustees of the University, Maj. Gen. Yousef Al- Helo, the Head of the Military Training Authority for the Security Forces, Mr. Jehad Abu Al-Asal, the Governor of Jericho Governorate, the Deputies of the University for Academic, Military, Administrative, and Financial Affairs, the Members of the Educational Staff, the Directors of Security Services in Jericho, at the Military Training Institute - Jericho, on Thursday 2ed of January 2020.

Maj. Gen. Dr. Al-Tirawi thanked Maj. Gen. Al- Helo and all the trainers for their perseverance, effort, and giving for the success of the training course, and the establishment of a military generation, praising the commitment and discipline of students during the three months of training, and reaching this high and prestigious level, stressing that Al-Istiqlal University serves Palestinian poor people, the children of martyrs, the Palestinian prisoners, injuries and the children of the members of the Palestinian Security Institution, mentioning that its establishment is a challenge to the occupation.

Moreover, Mr. Abu Al-Asal thanked Maj. Gen. Al-Helo, the trainers and the families of the students, saying “We need a loyal soldier for the homeland, able to withstand the different difficulties”, praising Al-Istiqlal University and what it offers the students, congratulating the students and their families.

During the ceremony, the graduates presented military performances included the silent military parade, the Security and Protection show, Taekwondo, and a poem by the student Hadeel Jarrah.

It is noteworthy to mention that the number of the new students who were received at the undergraduate program (170) students, and the intermediate diploma program (282) students, and they enrolled in a closed and constitutive military course for three months in the Military Training Authority. And, they will continue their educational process at the University since the beginning of the second semester during the current month of January 2020.