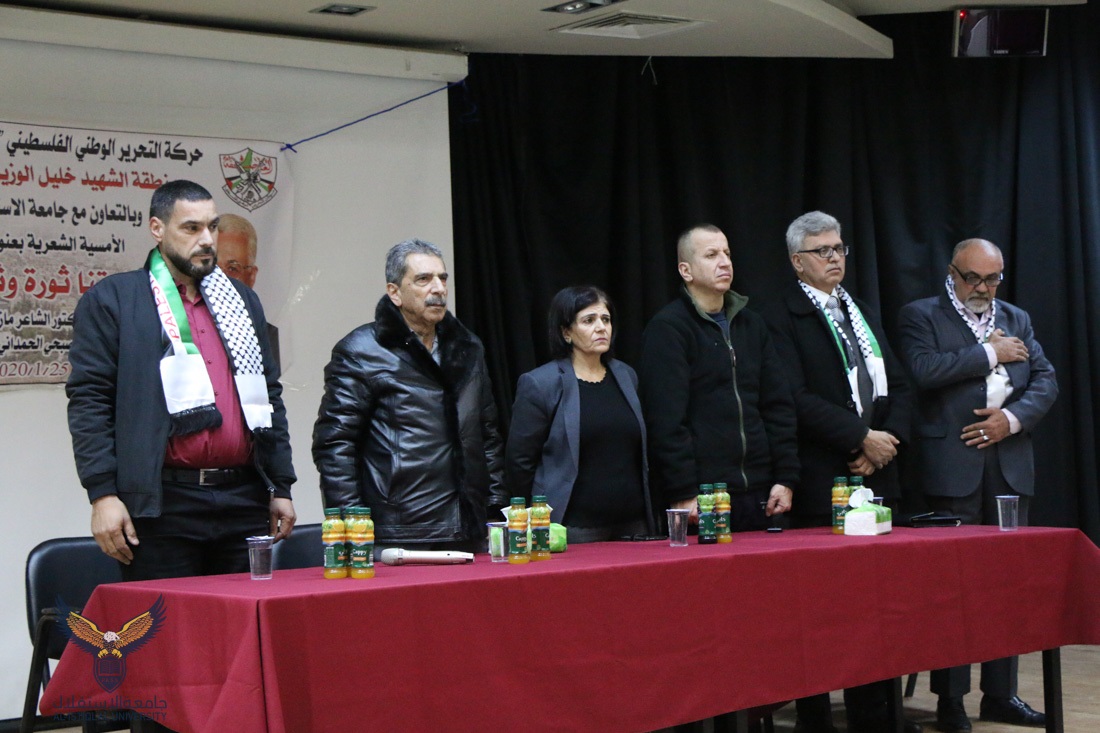 The Palestinian National Liberation Movement Fatah / Nablus Region, the area of the Martyr Khalil Al-Wazir / Abu Jihad, held a poetry evening entitled "Our Leadership is a Revolution and a Treasure", under the auspices of the Al-Istiqlal University, in the presence of HE Maj. Gen. Tawfiq Al-Tirawi, a member of the Central Committee of the Fatah Movement, Ms. Yousra Al- Swaiti, the Deputy Governor of Jericho, a number of Fatah Movement Regions’ secretaries, the Poet Mazen Badrakhan, the Poet Subhi Al-Hamdani, and a number of the people of the Jordan Valley, at Sheikh Hazza Bin Zayed Al Nahyan theater, on Sunday 26th of January 2020.

HE Maj. Gen. Al-Tirawi welcomed the attendees, stressing that Fatah Movement is the owner of the Palestinian national project, referring to the positions of great poets and writers, and their role in reviving the Palestinian cause, preserving the status of the Palestinian martyrs and prisoners, saying, “You must praise the martyr, the prisoner, Palestine, our history, the worker, and the farmer.”

Furthermore, he said that the political battle with the occupation will turn into a popular revolution and will have international dimensions, depending on the American decisions of legitimating the Israeli occupation of  the Jordan Valley next week, and the consequences of the deal of the century, saying: "Our response will be to stay in this land, die for this land, and there is no other solution, and the Jordan Valley, with its citizens, youth and villages, will remain Palestinian land forever.”

Moreover, the Poets Mazen Badrakhan, and Subhi Al-Hamdani, gave national poems, talking about Palestine, the Jordan Valley, and the need for stability, resistance and the steadfastness against the occupation.

At the end of the event, the child Rami Balawneh read a poem, besides giving a shield of appreciation to HE Maj. Gen. Dr. Tawfiq Al-Tirawi. Also, a meeting was organized between the attendees of the Jordan Valley and Al-Tirawi to discuss challenges and find a viable solutions.